The positive sentiment over the summer wool sales recess translated into a strong open when wool sales resumed this week. Despite the Au$ continuing to strengthen, buyers stepped into the largest accumulated offering since March 2020.

The positives for the week were not confined to the price increases, a lower pass-in rate and the third highest clearance of bales to the trade for the past 12 months were also signs of solid buyer demand. Coincidently the opening sale of 2020 saw an identical clearance while the only other selling week where more bales were cleared was in Feb 2020.

The fine end of the merino section again performed strongest, with 18.5 MPG & finer lifting 11 to 60 cents, with the strongest moves seen in the finer microns. The 17 MPG is now within 172 cents of its price in January last year, while the 16.5 MPG is within 92 cents or 4% of its corresponding level in 2020.

The spread of prices with fine wool premiums growing is a direct result of the end of the east coast drought, with the drought induced fine wool oversupply (as a percentage of the clip) contracting, and the consequential increase in medium wool portion of the clip allowing the fie wool premium to build.

Cardings had a strong week with Melbourne quoted up 5%, however both Sydney & Fremantle recorded robust results, with Fremantle the star performer up 53 cents.

The average clearance to date for the season is 29,191 bales, as a comparison the last sale of 2020 and the 2021 opening sale of this week the trade has purchased an average of 41,593 bales per week.

This stronger demand is reflected in the last five selling weeks where an average of almost 37,000 bales per week have been sold.

This week on Mecardo, Andrew Woods looked at the relationship between oil price and a sample of apparel fibre prices including wool.

The analysis found that the relationship between oil prices and apparel fibre prices (and their intermediate feedstocks) is highly variable, and that this variability limits the usefulness of oil prices for analysing the apparel fibre markets.

The open to the 2021 selling year lived up to the expectations (hopes?) of wool sellers, which provides the market with cautious optimism for next week.

Another big offering of almost 50,000 bales is rostered, with Melbourne again selling on three days, Sydney & Fremantle will offer over two days. 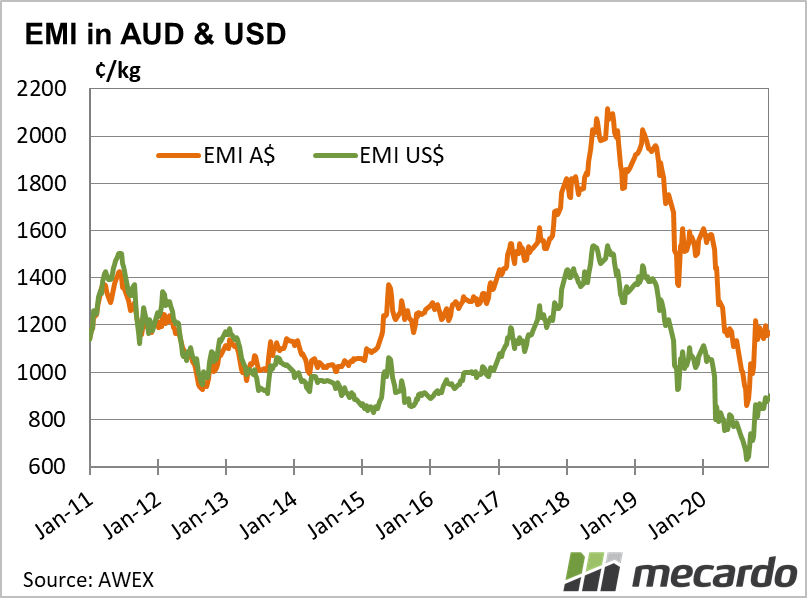