AWEX MPGs do a good job of tracking the main value part of the greasy wool market (the fleece lines between 16.5 and 32 micron) however there is finer (and broader) micron wool sold in Australia. This article takes a look at micron categories below 16.5 micron to see how they have fared this season.

AWEX MPGS are set up to reflect the general price movement of full length fleece wool, with some variation in staple strength and vegetable matter. Wool volumes below 16.5 micron are relatively low, so in this article combing length (greater than 50 mm long) averages are used, with the full range of staple strength. Vegetable matter is limited to a maximum of 2% and serious subjective faults such as cotts, heavy colour, stain and the like are excluded.

Figure 1 shows the daily average prices for 14.5 micron (complete with gaps in the data) and for 15 micron, with the AWEX 19 MPG included to show what the main merino market was doing.  The graph runs for the season to date so it starts in early July 2019 and runs to last week. The price for the 14.5 and 15 micron series trended higher after the weakness seen in August and early September. In comparison the 19 MPG traded along, within 100 cents of the 1800 cents level. In early March the effect of COVID-19 began to be felt in the market with the 19 MPG falling by 350 cents, as did the 14.5 and 15 micron series.

In Figure 2 a series for 15.5 and 16 micron is compared to the 19 MPG for the season to date. It is a similar story to Figure 1 with the 15.5 and 16 micron series trending higher from early September 2019 to February 2020. Then comes March with the 16 micron series falling the hardest (by around 500 cents). In early February, Mecardo showed how the sub-17 micron AWTA volumes continued to fall, which helps to explain the rising trend in prices for these finer micron categories up until February.

The sub 16.5 micron prices have followed the general merino market lower since February, at similar rates in terms of cents per clean kg. However, prices for this series increased relative to the main merino market between September and February.

By February these very fine micron categories were trading in the order of 10% above opening season prices, whereas the 19 MPG was trading 10% lower. Continued rainfall will lead to continued fall in supply for these sub17 micron categories which will help them out perform the main merino market. 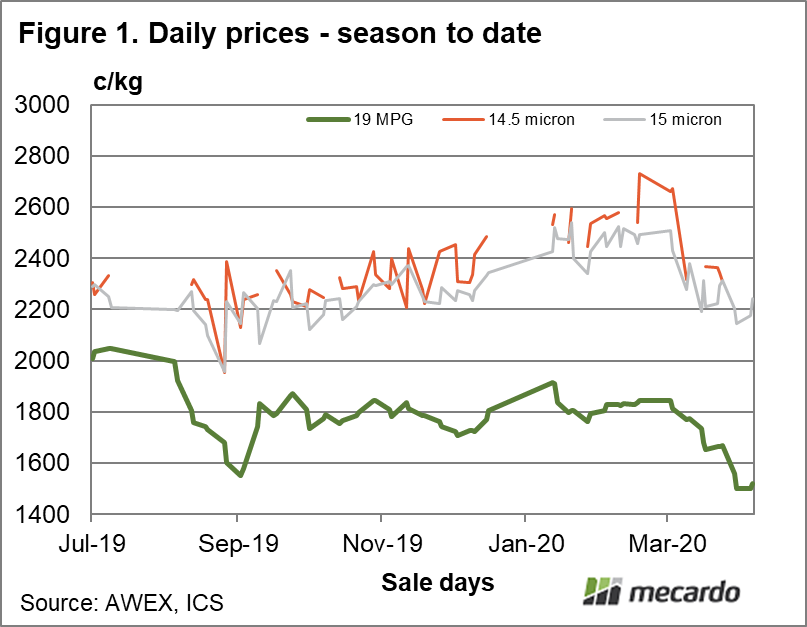