Green grass and a mild winter across much of the east coast means new season lambs have been streaming into the saleyards for a month already, when their season is usually only just starting to kick off.

Meat and Livestock Australia crunched the numbers and found there were 53 per cent more suckers sold at NSW saleyards for the first three weeks of August year-on-year. That’s 25% above the five-year average and made up 43% of all lambs heading through the yards in NSW for that period.

Despite the August influx, prices have started stronger in September, with all categories of lamb and mutton rising between 26¢/kg and 147¢/kg for the week. Finished lamb prices in the eastern states opened this week 4-5¢/kg firmer, having jumped 41-42¢/kg since last week. Nationally, the story is the same, with all indicators experiencing a lift this week, and trade lamb up 39¢/kg to 676¢/kg. Of course, the ESTLI is still trading at a more than 120¢/kg discount to the same time last year and is nearly 50¢/kg below the five-year average (698¢/kg). However, let’s not forget it is close to 70¢/kg above the 10 year average (585¢/kg) and is trading at its’ third highest level for the decade, with only 2018 and 2019 outstripping it for this particular week.

What’s given the market a slight kick in confidence? It could be supply – despite the onslaught of new seasons lambs onto the market for August, national lamb slaughter for the first three weeks of the month was around 20,000 head below the five-year average. Lamb yardings were up year-on-year for August, by nearly 6000 head, but this doesn’t account for the increased sucker throughput, meaning there were lambs missing in other categories. Could be that processors are now better prepared to take in the spring influx of lamb, as we reach the traditional timing for them to enter the market. The latest slaughter figures are still lagging a week, but show that despite fears of Covid-closures, national lamb kill was up year-on-year for the first three weeks of August.

Spring has arrived, and so with it will come a fresh onslaught of suckers. Supply could be slightly constrained by two factors – the number of new season lambs already processed, and an abundance of feed giving producers more options if the saleyard price dips too far.

However, it is the demand side of the equation that is the real unknown, as we wait to see how August export figures compare. 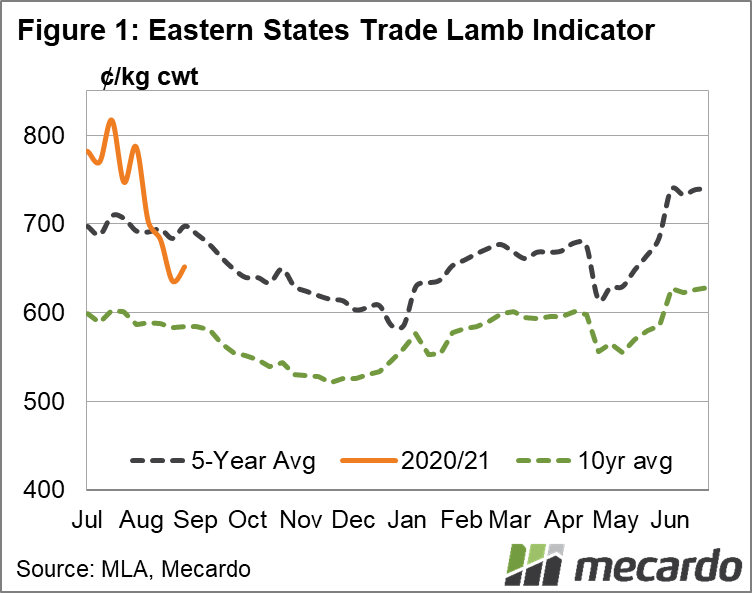