Supply, demand or both

The young cattle market has made a leap early in 2020, as rain and flooding strikes the east and west coasts. The Eastern Young Cattle Indicator (EYCI) has opened much stronger, and today we look at whether it is supply, demand or both which have driven values to five month highs.

The rain has been falling across the country, but while the totals map looks good, figure 1 puts the amounts into some perspective.  On the east coast the rains received in January thus far have only seen monthly averages reached in some small pockets.

We have seen the flooding which has resulted in those pockets, but large parts of Queensland and NSW are still 25-100mm behind long term months averages.

Still, the cattle market has responded early this year.  Figure 1 shows the EYCI has jumped 39¢ or 8% on the 2019 close, to post a five month high of 525¢/kg cwt.  With this being the second week of sales all the markets selling on Monday lifted.

The supply of young cattle in EYCI saleyards appears to be at least part of the driving force behind the price rise.  Figure 3 shows the five year average and 2019 young cattle yardings coming in at over 20,000 head in mid-January.  In fact, January is shaping as the lowest EYCI yarding for that month since 2010, which was before Roma came into the Indicator.

On the demand side it is definitely not processors driving the EYCI higher.  For the week to Monday Yearling and Heavy Steers were just 2.75 and 1.5¢/kg lwt higher, respectively.  There are reportedly plenty of cattle still booked for processing.

In contrast Restocker and Feeder Steers were up 15-22¢/kg lwt in all of NSW, Queensland and Victoria, compared to last week.  While supply is lower, with fewer cattle being out there, the rain is encouraging holding from those with young cattle on farm.

The movement in the EYCI in January is generally a pretty good indicator of the trend of the Indicator for the rest of the year.  There is also some more rainfall forecast for the coming week for Queensland, which, if it falls will see more areas reach their average and keep grass growing.

We know the EYCI has plenty of upside potential, the next targeting being 550¢ which we could see by the end of the week.  As confidence improves, the market should continue to track towards 600¢. 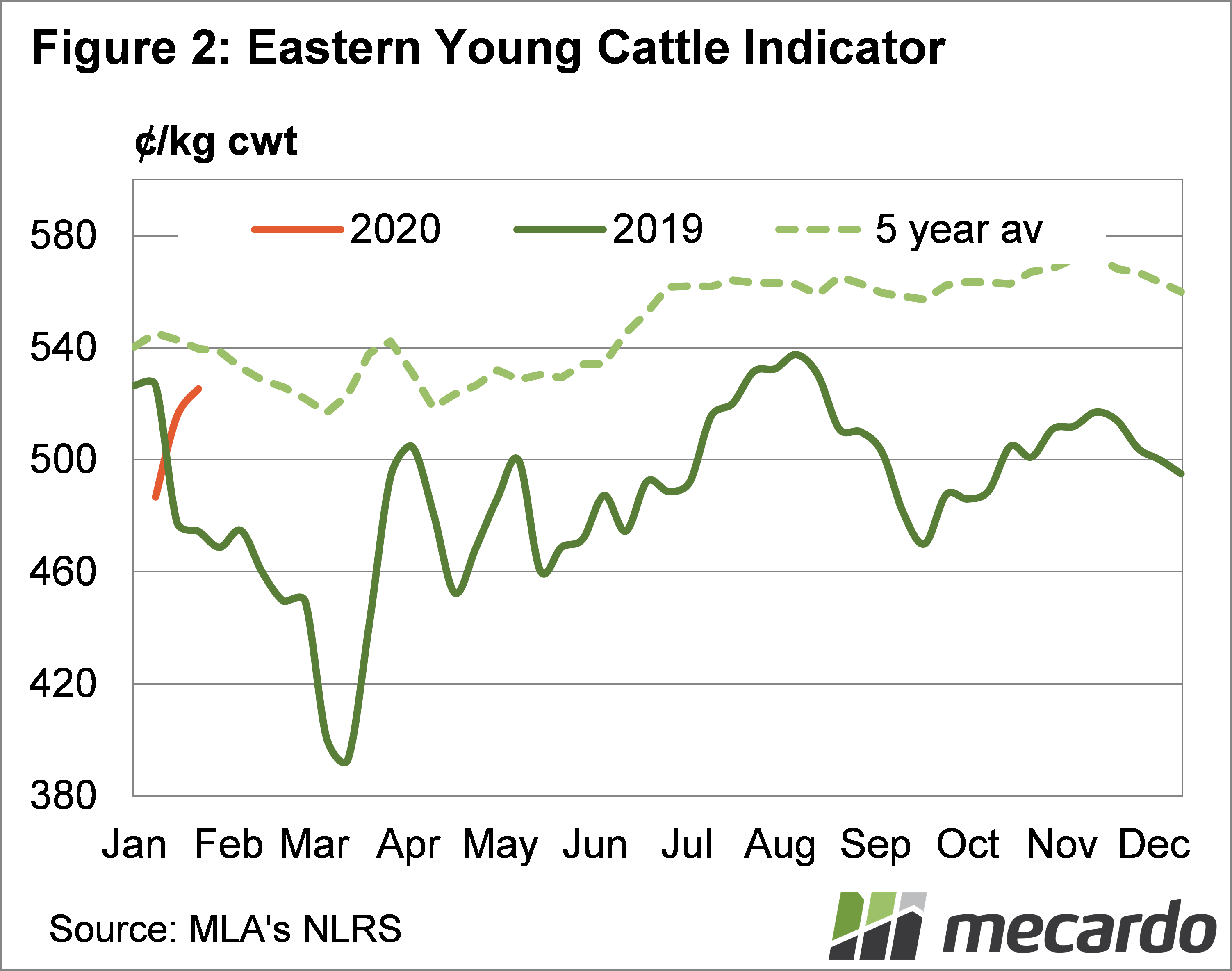