China takes its food security situation extremely seriously, and has accumulated vast volumes of key food and feed grains, now representing the largest strategic food reserves in the world. This accumulation has served to bolster world demand for grains for close to a decade.

Over the last decade, China has been steadily stockpiling key foods, and feed grains that are basic elements of its massive annual domestic consumption of food.

USDA estimates peg China’s current strategic reserve of wheat at 144mmt, rice at 116mmt and corn at 198mmt (Figure 1). Since 2011, stocks of all three core strategic grains have grown exponentially, with wheat and rice stocks having more than doubled and the size of corn stockpiles almost quadrupled.

When putting these mammoth current stockpile sizes into a global perspective, China currently holds around 50% of the world’s stores of wheat, 65% of worldwide rice stocks, and 70% of corn in storage.

All of this effort to squirrel away substantial stores of grain is to maintain a secure supply of food for a nation that annually consumes 150mmt of wheat, 150mmt of rice, and close to 300mmt of corn (Figure 2). Looking at the strategic reserves of wheat, corn and rice, that are between 65 and 95% of annual domestic consumption, the state grain caches could probably satisfy the nation’s demand for between 9 and 12 months.

According to statements made in April 2021 by Liang Yan, the deputy head of the Chinese State grain and reserves administration , current Chinese grain reserves in its major production areas are sufficient to meet China’s demand for three months, and stocks held in major centers of consumption for six months. These statements are in the ballpark of the 9-12 months implied by USDA estimates.

There is some question over the quality of the grain in storage however, particularly corn, as multiple reports have come out of China in the past that corn in storage has been damaged by mould, mildew and pest infestations. This has effectively made it unfit even for animal consumption, particularly pigs, due to their sensitivity to the mycotoxins produced by moulds and fungi.

However, significant barriers to substantially increasing production in a sustainable manner exist, as fertilizer usage rates of over 400kg/ha, more than four times the Australian average, suggests that some grain production may be being squeezed out of poor quality land in an uneconomic fashion, where input costs may exceed outputs. This has been fueled by heavy subsidies. For example, OECD reports that China paid out $206 billion in agricultural assistance in 2018. As such, Chinese wheat production yields of around 6 ton/ha, (figure 3), could be considered artificially inflated by excessive fertilizer use.

However, corn and rice yields of 6 and 7 tonne/ha respectively trail performance for these crops in both the USA and Australia. A significant limiting factor to China’s agricultural production is that it possesses little arable land compared to its populace, at 0.2 ha/capita- a far cry from 2ha/capita in Australia. Delang, (2018) estimates that 40% of china’s agricultural land is degraded from intensive practices, impacting upon the future ability for China to maintain agricultural productivity. Recognizing this, the Chinese government has made conservation of Chernozem soil in Northern China a strategic priority. Investment in local breeding of high-performance hybrid grains is also something China is also concentrating on to lift yields, with the ‘Jingmai 9’ wheat variety reportedly achieving 11 tonne/ha.

China’s habit of hoarding grains to maintain food security within its borders serves to create a constant boost to world demand for wheat, corn and rice. The Chinese government plans to strengthen its agricultural sector and improve soils and yields over the next five years, but it is questionable about whether this can be done sustainably. Thus, we are likely to see increasing import requirements. Coupled with increasing incomes and standards of living, there is no end in sight to China’s voracious demand for grains. 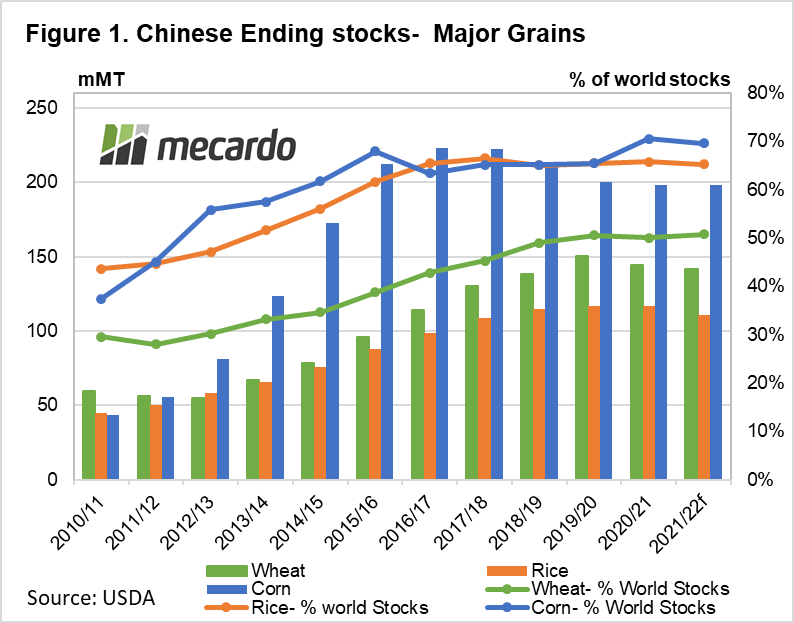