The Australian Bureau of Statistics (ABS) surveys Australian agricultural production annually. ABS data has been used to build the first schematic shown in Figure 1. It shows the number of sheep, cattle (beef and dairy) and the crop area for Tasmania for the past three decades. Cattle numbers have been relatively steady, as has crop area (although it can be quite volatile year to year) and sheep numbers exhibit the declining trend from 1990 through to around 2010, which is common in most sheep regions. Sheep numbers have been stable during the past decade, although this does not tell us about changes between wool and prime lamb production.

In Figure 2 auction sales data is used to show Tasmanian wool production in clean terms (left-hand axis) and the proportion of Australian sales which this made up (right-hand axis). The volume of wool sales follows the trend seen in sheep numbers. It declined through to around 2010 and since then, has stabilised. The proportion of national wool sales accounted for by Tasmania (in clean terms) fell through to around 2010, reaching a low of 1.5%. Since then it has risen, to around 3%.

On the question of wool and prime lamb production, one way of looking at the effect of change in the two enterprises is to look at the proportion of Merino wool in the national clip. This is not a problem-free analysis as it does not control for shedding sheep or composite style sheep which are breeds with wool less than a by-product. Figure 3 shows the proportion of the wool sold at auction which is designated as Merino, from the mid-1990s, for the Australian clip as a whole and the Tasmanian clip.

Tasmania has switched more sheep out of Merino wool production into prime lamb production, although this looks as though it might be steadying. In terms of the big trends seen in the sheep flock, Tasmania has followed the trends seen in other regions both in Australia and in other Southern Hemisphere sheep-producing nations. 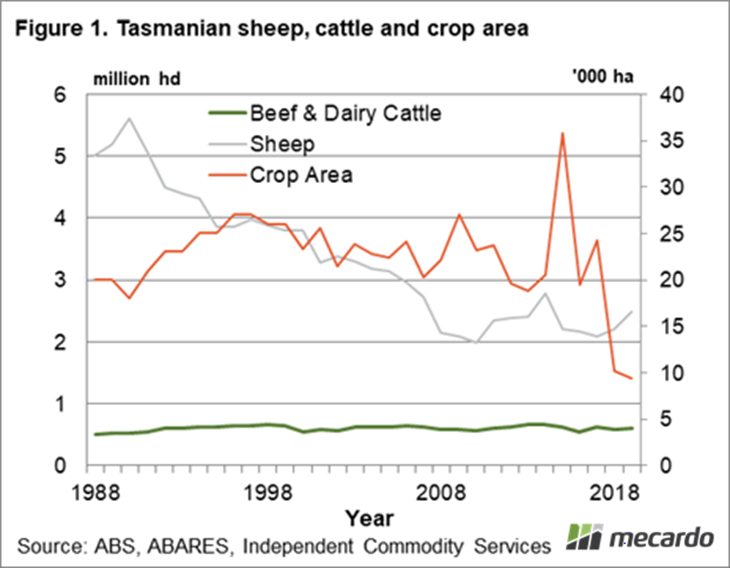