The trend (down) continues

It is difficult reporting weekly on the continuing demise of the wool market, with price decline now seemingly a weekly occurrence. AWEX noted that at least the market has been able to continue “with all industry stakeholders working together to ensure that wool auctions continue”. While this is certainly a good effort, allowing producers to get wool to market and exporters to buy, it is small consolation. In the ten selling weeks since the beginning of March, the EMI has fallen 390¢.

Turnover this week was $24.83 million at $1,201 per bale, taking the year to date value to $1,804 million. For contrast, in the same week last year the 28,500 bales sold returned $58.3 million at an average of $2,039 per bale. The year on year comparison of sales value is down a massive $1.1 billion impacting not only on growers incomes but on all sectors of the industry.

Despite the weaker market, the pass-in rate was lower this week at 18.5%, resulting in 20,661 bales clearing, 3,643 more than last week. Again a large withdrawal was evident with 11.8% of the original offering withdrawn prior to sale. Season to date there has been on average 27,990 bales sold per selling week. This is well down on the 32,800 average for last season.

Again the falls were across the board, with Merino types losing 30 – 87¢ and Cardings down on average 27 to 44¢. The note from the X bred section was again that poorly prepared clips we difficult to find buyer support.

Next week’s national offering increases slightly to 25,660 bales. AWEX report that due to limited quantities Sydney and Fremantle both will have one-day sales, Sydney selling Tuesday and Fremantle selling Wednesday, this is a move designed to avoid Melbourne selling in isolation. 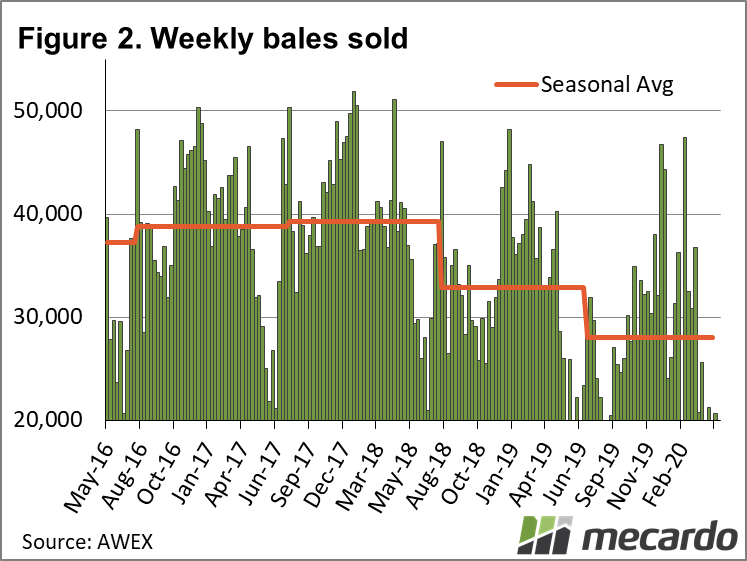