This time last year we were bemoaning the decline of lamb export prices to the US, and its impact on heavy lambs. The latest export data shows US demand for lamb continues to improve, and export prices are supporting lambs at saleyard levels.

April lamb export data was released this week and it is relatively positive for the lamb market.  Last week we looked at lamb slaughter, which followed the seasonal trend and was slightly lower in April.  As a result, there we less lamb to export, but April exports came in just 3.7% below March which was incidentally the same decline on last year.

The 17% year on year increase in exports to the US didn’t come at the expense of price, which suggests demand was stronger.  Imported lamb prices quoted by Steiner Consulting in their April US Lamb Market Update were steady on last year for high value racks, but figure 2 shows they have been much lower since.

Lamb rack prices have improved by more than $US2/lb since February.  This equates to $5.50 per rack, or $11 per lamb in Australian terms.

For lower value Frozen Legs of lamb, prices are up on both early this year and on last year.  Figure 2 shows that leg prices are as high as they’ve been for over two years.  Legs don’t add as much value to the carcase, but a 20%+ increase in price certainly helps.

The improvement in export lamb prices to the US can be put down to rising domestic beef and lamb prices, both have been documented by Mecardo in recent weeks, but grilling season is on the march.

While the US took more lamb, the Middle East continued to struggle for lamb volumes.  Much of the decrease can be put down to the end of air freight subsidies to Qatar, with the displace meat finding its way to the US and South East Asia.

Increasing demand from a market which takes around 25% on our lamb is nothing but good news for prices.  Figure 3 shows the better demand is being reflected in prices, with the Eastern States Trade Lamb Indicator in USD terms sitting well above this time last year.

Exports remain the backbone of the lamb market rise of recent years, and strong demand should continue to support prices in the medium term. 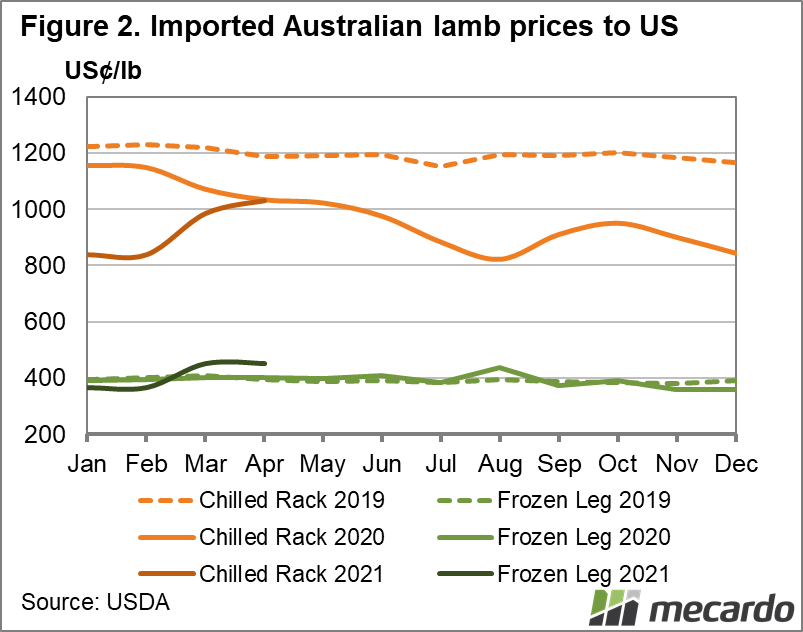 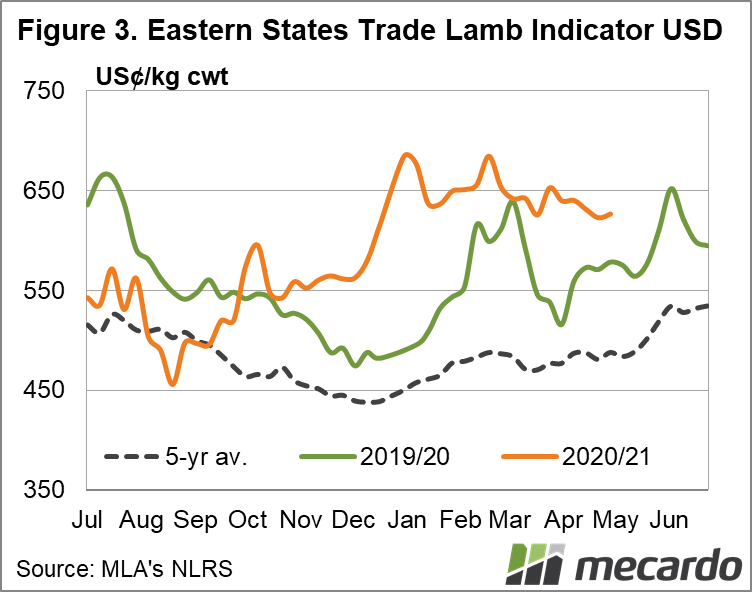