Lamb markets continued to soften in the east this week while in Western Australia they are moving to the beat of their own drum. Finished lamb prices continue to rally in the west, with producers this week enjoying higher returns than in the east.

The Eastern States Trade Lamb Indicator (ESTLI) ended the week at 838¢/kg cwt which was 11¢ lower than the week prior and 13¢ up on the same time last year. In the West, the trade lamb Indicator gained 32¢ over the week, pushing up to 851¢/kg cwt. It’s the first time since August 2020 that the WA trade lamb indicator (WATLI) has been higher than the ESTLI.

No matter which eastern state you look at though, mutton took a significant hit this week. The National Mutton Indicator dropped 45¢ to 575¢/kg cwt. It’s likely that processors are prioritising lambs in their kill while labour availability remains an issue and the peak in domestic lamb demand is here.

The lambs slaughter figures for last week tell the story of continued constraints in slaughter capacity. While east coast lamb slaughter lifted 44% on the week prior, the 273,309 head of lambs processed was 15% fewer than the same time last year and 26% below the five-year seasonal average. East coast sheep slaughter was 32% lower than the same week in 2020 and 51% below average levels.

All National lamb indicators continue to trade at levels higher than 12 months ago so despite the disruption, lamb markets are holding well. We usually see demand weaken post the Australia Day demand peak and prices soften, but it might not be so obvious this year while retailers try to get products on shelves while supply is constrained. 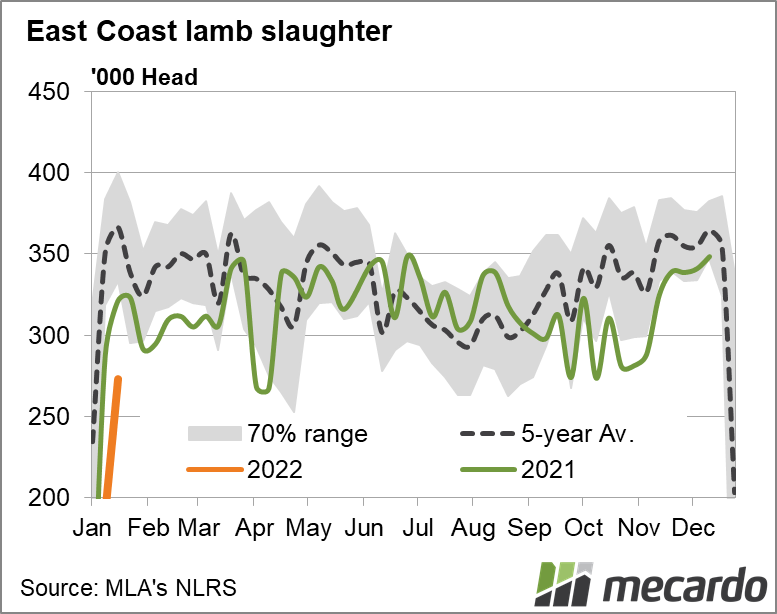