The numbers of cattle on feed managed to maintain above 1 million head to the end of March, but it might be a different story at the end of June. Rising feed prices and rising feeder prices haven’t been matched by better finished cattle values, with a squeeze on margins resulting.

Grain prices haven’t moved that far since harvest.  Despite increasing international prices, feed grain values have only gained $10-20 in major lotfeeding areas.  The cost of feed is still around $100 cheaper than this time last year, but all of the lower value has been overridden by rising feeder prices.

Since the start of the year export feeders have gained close to 10%, and we’ve put export feeder prices into the model at 470ȼ/kg lwt, which is obviously a record value.  Lower herd numbers, fewer females being sold, and the need for vertically integrated operations to keep supply flowing, has pushed feeders to new highs.

Most feeders are now costing over $2000 per head, which, along with feed costs puts Northern input costs at 714ȼ/kg cwt (figure 1).

In the south grain is a little cheaper, bringing the feed costs in at just on 700ȼ.  Figure 2 shows the 100 day grainfed cattle price has reached a record, with quotes around 700ȼ, but the rise hasn’t been as strong as feeders.

Both inputs and output prices are at records, but it has margins in the very tight range.  Figure 3 shows lotfeeder margins on the slide for the last six weeks, moving into negative territory over the last month.

Things aren’t as bad as this time last year, when margins delved to record lows for a couple of weeks, but negative margins don’t tend to hang around for long.

We don’t include overheads in the margin model, which make margins even worse for dedicate lotfeeders.  As such we can’t expect further rises in export feeder prices in the short term.  Even with a 30ȼ rise in grainfed cattle values, it would only get margins back to marginally profitable.

Tight lotfeeder margins are positive for slaughter cattle prices in general.  It means less cattle are going on feed, and might see processors having to look for grassfed cattle for beef supplies in late winter and early spring. 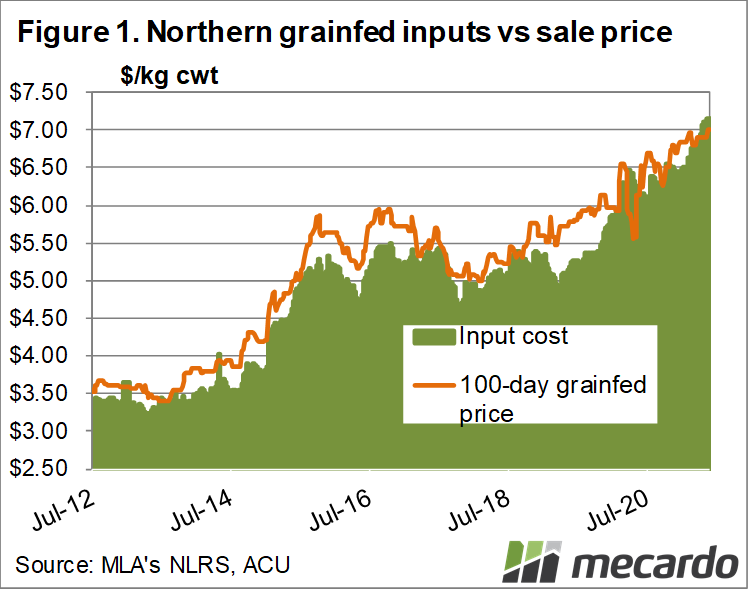