Another strong week on the cattle markets, with the Eastern States young cattle Indicator (EYCI) advancing towards record territory again, with signs of generally tightening supply providing support to prices, while demand for young cattle seems to be red hot at the moment.

The main source of the retreat in slaughter numbers were the key states of QLD and NSW, which respectively notched up 10% and 6% falls in processor throughput.

Yardings plunged in NSW, where numbers fell 33% week on week, but the trend was not followed in the other states, which were largely steady.

Generally elevated prices for many categories of cattle this week are suggestive that the trend towards lower numbers of cattle being offered in both saleyards, and to processors, via over the hooks direct channels, has probably been repeated this week, so we aren’t expecting to see a significant increase in supply being reflected in next week’s numbers. Historically, slaughter this time of year typically trends downward, and could go lower, supporting this view.

The EYCI was steadfast this week, pushing up another 9¢(1%) to reach 1,029¢/kg cwt, despite considerably stronger yardings over the last week, which lifted 32% on the week prior to 14,437 head. This lift in prices, in the face of higher supply is suggestive that demand for young cattle is red hot at the moment, a situation that should give producers a lot of confidence.  Roma prices lifted 11¢ to 999¢/kg cwt, on 16% higher yardings, while Wagga Wagga prices lifted 18¢, to 1,074¢/kg cwt with eligible yardings up a massive 197% week on week. In Dalby, average prices slipped 5¢ to 1,010¢/kg cwt, despite a 38% reduction in eligible yardings, with the price reduction driven by an increase in the proportion of lower priced heifers.

On the National Indicators, there was a mixed result, with Processor Feeder, and Vealer Steer prices lifting 2-3%,  but Medium Steer and Heavy Steer prices weakened slightly, giving up 1% – 2%

90CL frozen cow prices were flat last week in Australian dollar terms, but prices lifted half a cent per pound in US dollar terms, with Steiner reporting that the market for imported beef in the US continues to suffer from short supply.

The Aussie dollar fell 1% against the US greenback again to 0.729US, dragged down by iron ore prices falling 11% yesterday, and stronger US retail sales data providing support to the US dollar values.

Little to no rain is expected in NSW and QLD in the coming week, with only 5mm expected for most of NSW, though, in contrast, parts of Eastern VIC is likely to receive a solid 50mm. With prices holding up, supply in general showing signs of shrinking, and demand for young cattle looking red hot, we can expect more firm prices next week. 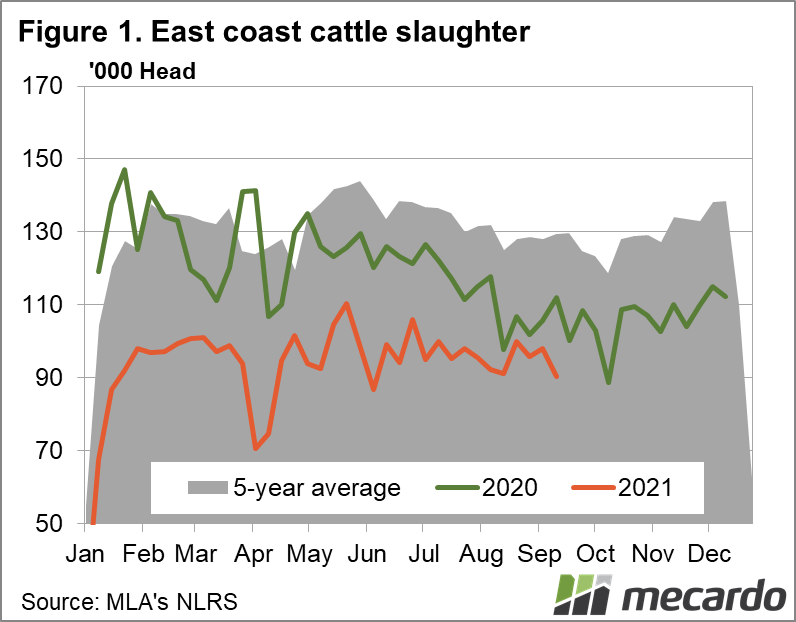