Tight supply, veal gets some love

Another encouraging week to report on, with tight supply supporting prices, slaughter up, and the EYCI up a smidgen, with a surprising highlight being that the long suffering vealer price finally saw some love, spiking sharply.

East coast yardings plunged downward sharply last week, led by NSW taking a huge tumble, down 48% for the week. VIC and QLD offset some of the tighter supply, up 7%, and 5% respectively, while the little SA marketplace also climbed.

Overall a 13% decrease in numbers saw 38,816 cattle yarded on the east coast for the week ending 31th July, which is down a massive 41% compared to the same time last year. Though, as usual, we do have to consider that last year was heavily impacted by drought.

Slaughter numbers lifted slightly, rising another 3% on the week prior. The total kill increase was led by a healthy 25% lift in VIC, offset by a small 2% drop in NSW, while QLD and SA held their ground.  A total of 115,091 cattle were processed, which is down 19% compared to the same time in 2019.

The Eastern Young Cattle Indicator (EYCI) gained some ground this week, coming up 1% on the prior week, settling at 761¢/kg cwt.On the categories, this week was a bit of a mixed bag, but overall, the tighter supply continued to have an impact. Most prices have risen, building on gains over the last few weeks. Restocker activity is still very evident, and vealers finally ended their losing streak in style, with a very sizable jump to above levels not seen since the start of last month. Vealers lept by an impressive 35¢ (9%) to end the week at 422¢ /kg lwt.

Just as it looked like a return to normal on the processing front was in sight late last week, Victoria imposed new restrictions upon the state’s abattoirs.  Processors will be required to curb their peak worker numbers on site at any one time by one-third, from the operating levels seen last month. As such, we can expect another retreat in slaughter and yarding numbers over the coming weeks. A ray of hope does exist, however to mitigate the sorry situation, as we may see some of the slack picked up by NSW if border crossing and freight costs allow. VIC processors have also indicated that they will add extra shifts to try and maintain production levels while they have the option. At least the east coast, is expecting some good rain, which is the brand of gloomy that’s always welcome. 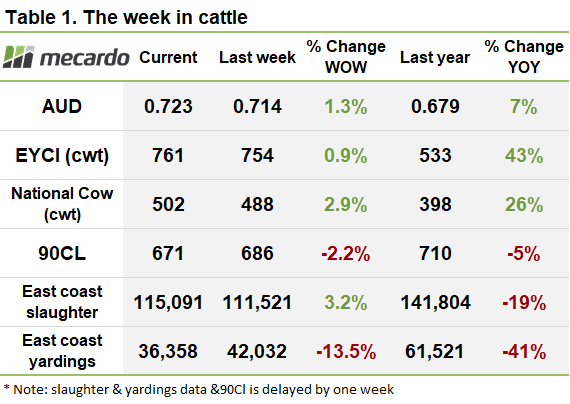 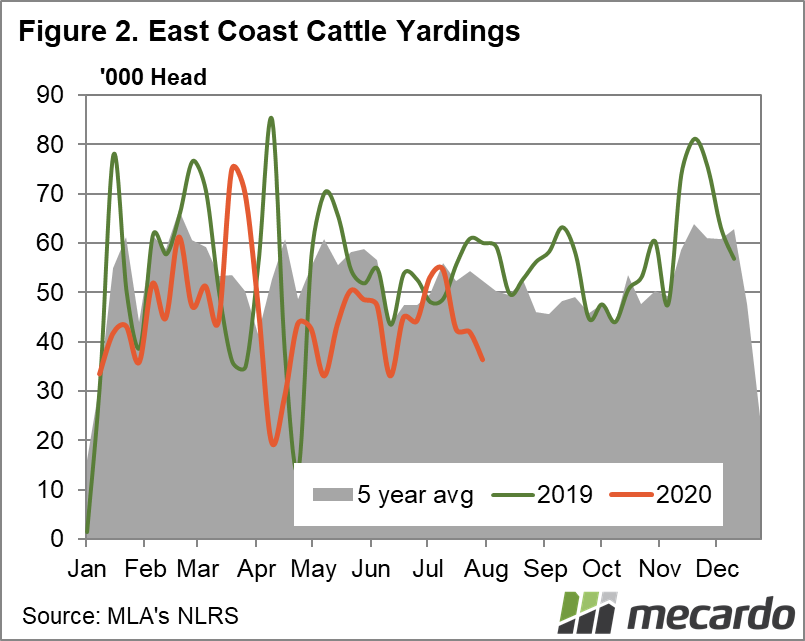 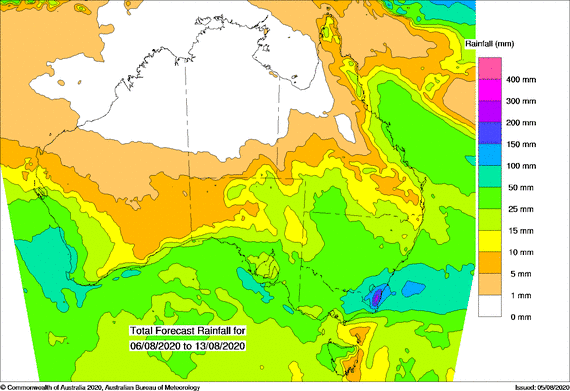 Map from Aust Bureau of Meteorology