With both saleyard and over the hook lamb prices trending below year-ago levels, lamb producers that have yet to turn off suckers in the early flush are considering their options. With plenty of feed in front of them, is it better to cash in now and use the grass for other opportunities, avoiding the risk of an uncertain global economy? Or hold onto lambs to heavier weights and hopefully for more dollars per head.

Let’s first look at the returns you’d get right now if your suckers were ready to go. The national saleyard trade lamb indicator is averaging 688¢/kg for the month of September. This is a drop of more than 100¢/kg for the same month last year, and just a fraction under 100¢/kg less than 2018. Let us note though, it is higher than any year on record prior to that. Traditionally, this price indicator average drops every month for the remainder of the year, losing roughly 100¢/kg between September and December for the past two years.

Over the hooks, medium trade lambs are averaging 650¢/kg for the month, which is a similar discount to the previous two years as the saleyard price. The difference is, the OTH price has fallen nearly 50¢/kg since August, while the saleyard price is up 9¢/kg on last month – an anomaly on past results. Especially considering national lamb yardings increased and east coast lamb yardings were up 25 per cent year-on-year last week.

Cut to heavy lambs over 22kg dressed, and the picture doesn’t quite follow the usual pattern either. In the saleyards, that national indicator is averaging 658¢/kg for September, a 30¢/kg discount on trade lambs. It has been trading at a 30-50¢/kg discount since indicators started recording again in June. For the past two years, heavy lambs have traded equal or at a premium to trades for the June to December period. OTH indicators have been more consistent across the other categories, but trade lambs are still at a premium this month.

The current combination of lower processor capacity than recent years (due to covid-19), supply seasonally on the increase and global economic uncertainty putting a question over export demand and prices – there’s a strong chance heavy lamb prices will continue to trade lower than trade lambs; even as the Victorian flush hits the market. If this is the case, those with lambs to sell and grass still to eat should calculate weight gains and price forecasts carefully. 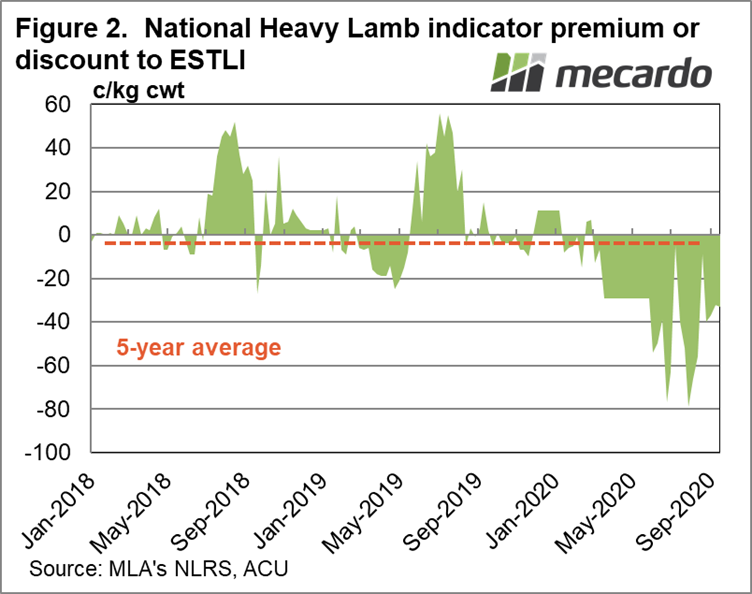