Ukraine has long been considered the “Breadbasket of Europe”, and is a significant source of wheat and feedgrains in global trade. Rising tensions with Russia and speculation that armed conflict may imminently break out, means it might be a good time to quantify what Ukraine means to grain markets.

A Russian military force of over 100,000 soldiers has been amassed along the Ukrainian border for some months now. Military analysts have speculated that any Russian incursion upon Ukraine may impact Ukrainian black seaports, resulting in supply lines being cut off, and exports along with them.

In 2014, the Ukrainian Crimean Peninsula was annexed by Russia, back then, between February 22nd, and March 20th, nearby CBOT SRW prices spiked 15% in response. (Figure 3)

This time around, it is expected that the Russian nation potentially has its sights on occupying not just a sliver of land, but part of Ukraine east of the Dnieper river, or seizing all of the black sea ports.  It is generally thought that without significant assistance from allies, any Russian military aggression will result in a swift victory.

As mentioned last Friday in his article Wheat caught between a hammer & a sickle , it could all just be case of сэшхуэ  (shashka) rattling, and may well blow over, along with the risk premium that has been built into grain markets so far.

In 2021/22, around 24mmt of wheat, (figure 1) and 32.5mmt of corn, (figure 2) are expected to be exported by Ukraine. To highlight that the significance and relevance of Ukraine to world grain markets, this represents roughly 12% of the global wheat trade, and 16% of total corn exports worldwide.

An important element to note is that the importance of Ukraine’s wheat exports on a global scale have doubled from 6% since 2014 (the time of the last conflict in the region), to an estimated 12% , indicating that more significant price spikes could be generated in this round of Russian tension. (figure 1)

East of the Dnieper river historically represents around 47% of Ukrainian wheat production (figure 3), and 40% of corn production. Any Russian military occupation of this land may lead to substantially lower production, and certainly lower grain export to the rest of the world, not just in the short term, but long term, as farmers flee, infrastructure is destroyed, and supply chains for inputs and maintenance are disrupted.

The importance of black seaports to grain exports

An alternative potential Russian incursion scenario proposed by US think tank, Centre for Strategic and International studies (CSIS) involves Russia occupying a strategic belt of land between Russia and Transdniestria, inclusive of all Ukrainian Black sea ports. This would effectively cut off Ukraine’s access to the Black Sea and established efficient delivery of grain to export destinations.

This would be devastating for grain trade, as Ukraine represents a supplier for over 10% of annual wheat consumption for 14 countries, including 28% of Indonesian, and 21% of Bangladeshi wheat requirements. The USDA FAS postulates that utilizing trucks for large scale transport of grain over land is not a feasible alternative as Ukrainian roads are not in good enough condition to facilitate this.

The potential for conflict between Russia and Ukraine could result in a major reduction in world grain supply if black sea wheat production and exports are curtailed, leading to higher wheat prices and opportunities for Australian producers. Any armored incursion into Ukraine must happen soon before the imminent spring thaw in March, so the tense situation could equally diffuse in the near future. 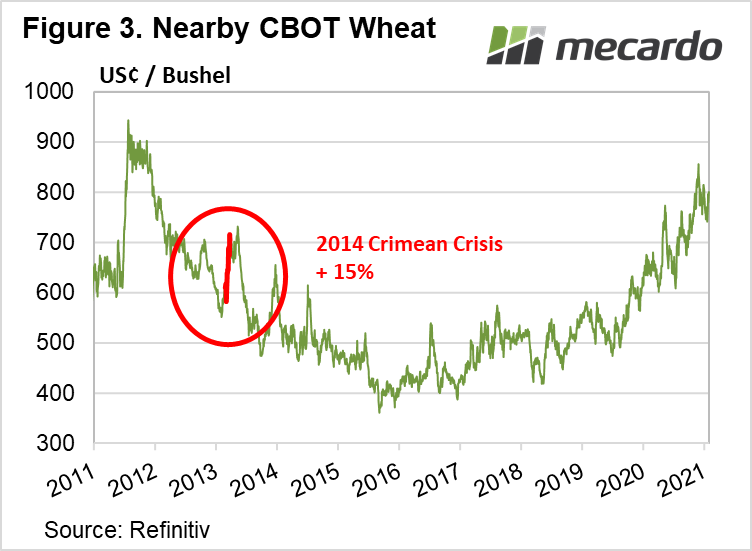 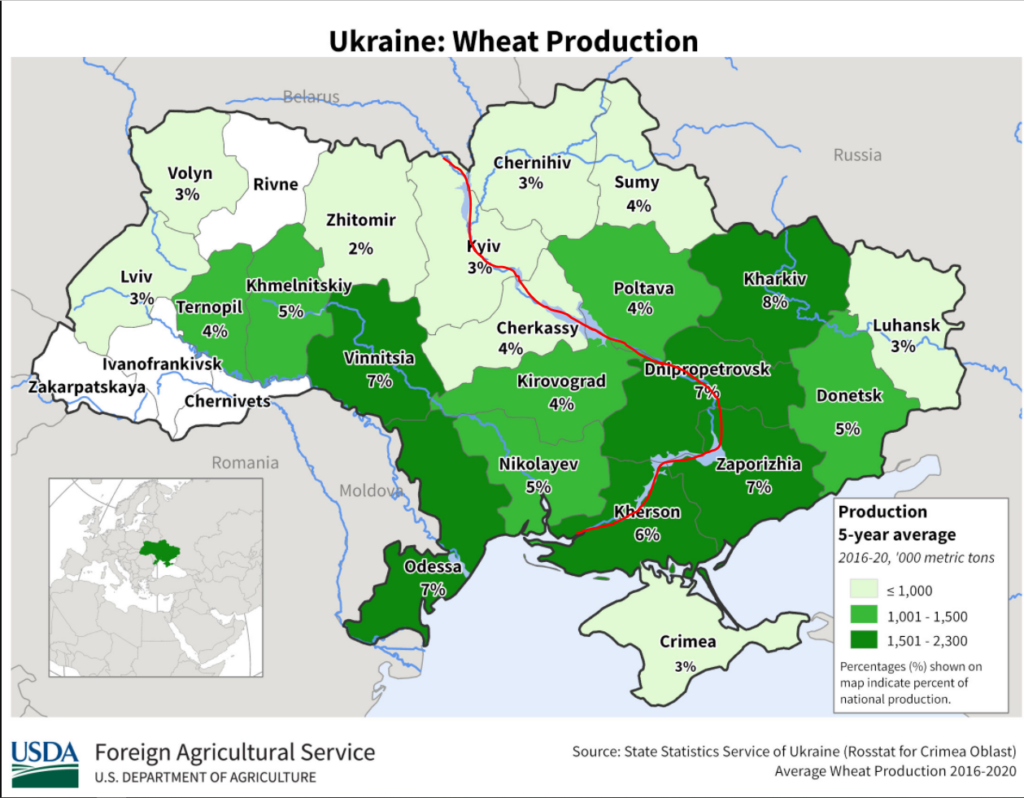