The USDA released a new WASDE report this week, and it surprised the wheat market somewhat, but the market’s focus remains on both weather developments, recessionary concerns and changes in the Ukrainian export situation.

The July WASDE release that was put out this week and US wheat production estimates were pitched 1.2 billion bushels higher, driven by an increase in harvested area, but the increase surprised the trade, which was generally underestimating the volume of spring wheat production.

Overall, global wheat supplies were downgraded 1.1mmt, with the headline reductions in production forecasts for the EU, Ukraine and Argentina offset by higher estimates of beginning stocks.  The EU was hit hardest, with a 2mmt reduction, however, the US, Canada and Russia were revised upwards.

Global wheat consumption was led 1.8mmt lower by assumptions of lower feed use in the EU and Ukraine. The overriding result was that 2022/23 ending stocks increased 0.7mmt to 268mmt, creating a bearish signal for the markets. (Table 1)

While there is no end in sight for the war in Ukraine, it is expected that Russia will agree to a deal with Turkey and the United Nations to enable exports of grain out of Ukraine to resume. It’s not a done deal, but the dialogue coming out of the UN at this stage suggests that some critical sticking points have been overcome. The proposal includes provision for inbound ships to be searched for smuggled weapons in Turkey, and for the Ukrainians to carefully guide grain carriers though the minefields protecting the ports. If the deal goes through, it has been reported that it is expected to free up access to close to 20mmt of grain stranded in Ukraine, due for export, making much needed space for the new harvest. However, given that the resumption of exports involves navigation through minefields in a volatile region, execution of the plan in practice may be challenging, particularly in relation to securing insurance. Exposure of safe pathways to port may also increase the risk of Russia capturing more ports, so the deal could prove to be redundant in short order.

In the foreground of the markets mind however, is how recessionary concerns have pulled the rug out from underneath commodity markets generally as the flow of cash dries up, stemming from a universal flight to traditionally safer assets. A close eye is also being kept on weather developments. For example, recent good rainfall over the Canadian prairies assisted recent production forecast upgrades, and weather forecasts indicate more rain to come. Similarly, US spring wheat crop conditions are being monitored closely.

Markets reacted negatively to the WASDE and Ukrainian export news, compounding the downward trend generated by recessionary fears. Since the 11th of July, CBOT wheat prices have lost $27/ton, or 6% in Australian dollar terms, with the December 2022 contract settling at $454/ton. (figure 2)

Any final confirmation of the Ukrainian deal is likely to give the market some indigestion next week, but the main focus going forward is all about weather events, and how recessionary concerns impact the interest of managed money in agricultural commodities. 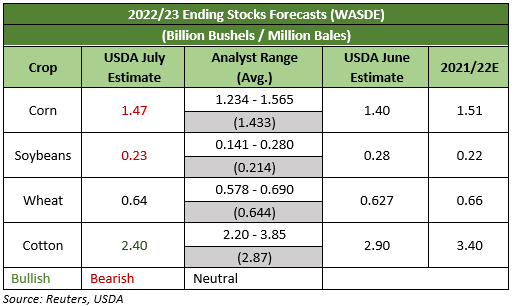