Australia produces about three quarters of the world Merino clip and combined with geographical isolation it is easy to overlook wool production in other countries. Be sure that the supply chain does not make this mistake. In a time of low Merino supply, there is a good argument to see other regions of production as allies. With this in mind this article takes a look at changes in the Uruguayan wool clip since the late 1990s.

Mecardo has previously looked at the South African wool clip in comparison to Australia and the makeup of the New Zealand woolclip (view NZ article here). Data for the micron makeup of the Uruguayan clip comes from Delta Animal Production Consultants Delta Animal Production Consultants, based in Uruguay, who survey the wool trade to establish wool production.

Figure 1 shows a breakup of the Uruguayan clip by micron categories, with the volume in millions of greasy kg for 1997 and 2019. In the late 1990s Corriedales dominated the Uruguayan clip with 26.6-28 micron wool the largest category followed by 28.1-29.5 micron the second largest category and daylight thereafter. Total production was around 80 million kilograms greasy.

Now look at the 2019 production estimate in Figure 1. Firstly overall production had fallen to 23.5 million greasy kg with the mid-microns of the Uruguayan clip suffering all of the loss in production. Volume on the broader edge of production (29.6 micron and broader) was stable while production rose on the finer side (less than 22.5 micron). From the late 1990s there have been a series of programs encouraging a move to finer wool production.

Commodity prices are international in their nature where traded across country borders. Farmers will respond in a similar fashion to common price signals be they in NSW, Tasmania, Western Australia or Uruguay. When we consider wool production hence supply it would make sense to widen the net beyond Australian borders to include the other key wool production regions in the world such as Uruguay (about two thirds of the South Australian clip). 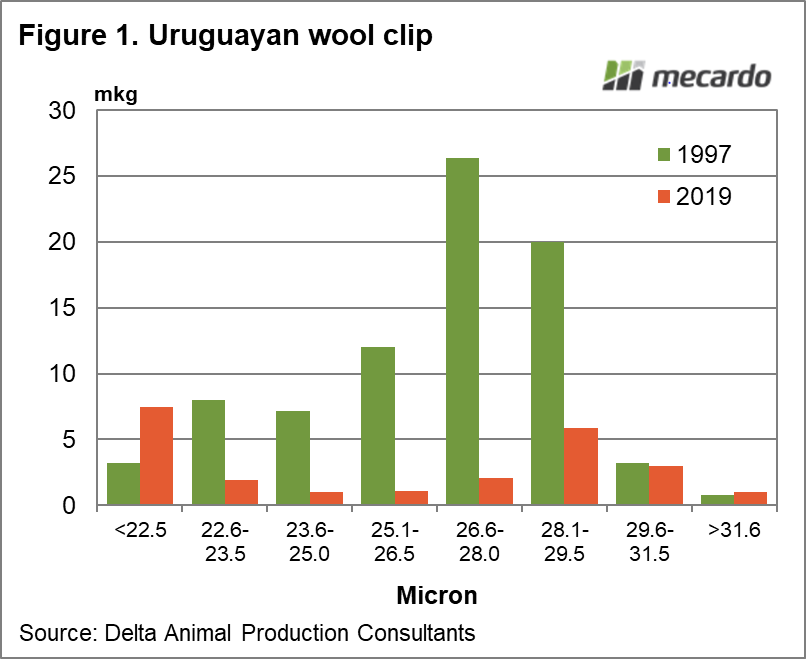 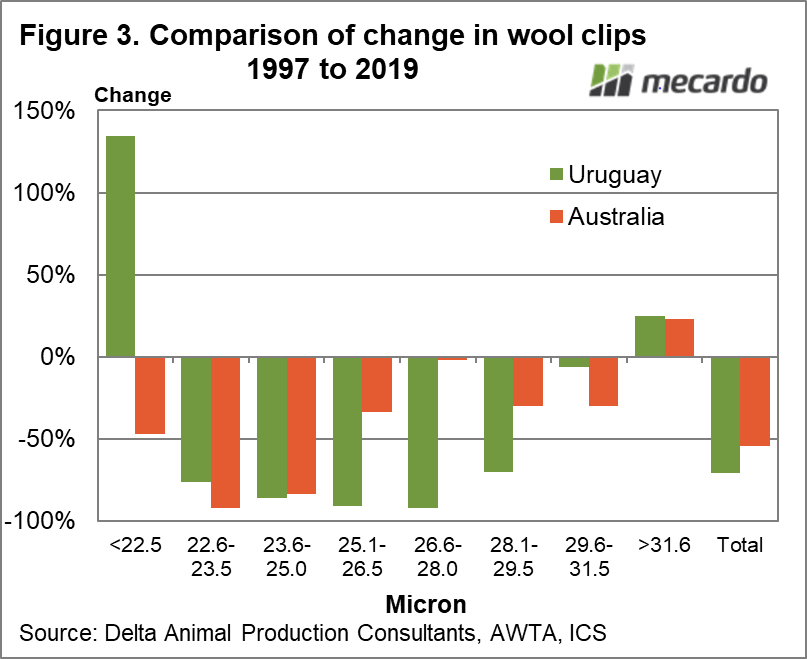