Let’s look at the US 90CL indicator - a price measure that historically the Australian market has been reflective of.

Latest available data for the 90CL price has it sitting at 677.5ac/kg, down 5 per cent on last year. The national cow indicator, at 494c/kg, is 19 per cent above year-ago levels. This puts the 90CL at a premium of 183c/kg. The Eastern Young Cattle Indicator, on the other hand, currently sits at its largest premium to the 90CL since January 2017. Not surprising since just this week it has broken yet another record, and currently sits at 788.25c/kg.

The most recent Steiner report out of the US has supply concerns holding the 90CL product firm, as weekly slaughter levels in Australia are sitting about 30,000 head below last year’s levels. And while overall beef cattle slaughter in the US has nearly recovered from Covid-19 caused processing slow-downs, an uptick in the US milk price during July impacted the volume of cow grinding beef on the market. Dairy farmers holding onto more cows caused cow slaughter in this sector to dip 10 per cent year-on-year, but with milk prices now on their way back down, these cattle are likely to hit the market sometime soon.

The latest export figures (July) show less Australian beef has headed to the US for the year-to-date compared to 2019, but this year’s volumes are still tracking above 2017 and 2018.

Volumes for both June and July were actually above year-ago levels, picking up some of the slack from the significantly lower volumes going into China over the same period. The volume of Australian beef sold to the US in July was the highest since 2015. July data for the value of beef exports is not in yet, but June US export values were well above the five-year average, and again the highest figure since 2015.

Domestic cattle prices are maintaining their strength, but the EYCI-90CL price gap goes a long way to highlighting how out-of-pace Australian prices are compared to the global beef market.

The latest Steiner report out of the US points to strong competition for the 90CL market from areas such as South America and Ireland, where prices are currently lower than Aus. If the Australian dollar continues to rise, there’s risk of our beef being too pricey for our markets. 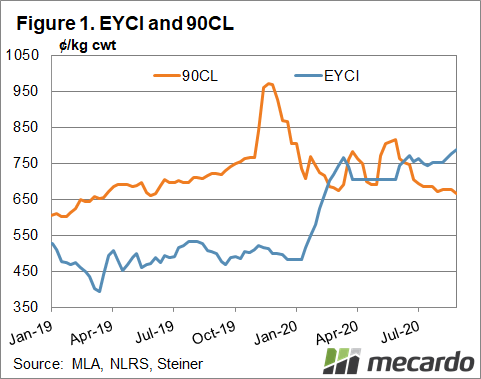