Forecasts of unseasonally cold temperatures of -15C in some US states, carrying the potential to kill planted wheat crops; are bullish for the US wheat price. Traders have reacted strongly to this news, with US CBOT SRW wheat rallying 3.26% yesterday to $US 242/mt, before subsequently retreating 2% on the back of more moderate weather predictions.

The US is currently under the influence of a “polar vortex”. This is where icy air has migrated down from the arctic regions, producing unseasonally cold temperatures, even compared to a normal US winter. A state of emergency has been declared in some US states as a result.

Firstly, we consider the forecast for yesterday from Weather Underground, (Figure 2); a service which incorporates the data of over 250,000 privately operated on-farm and city-based weather stations, as well as government data. Temperatures in the central US wheat belt are forecast to dip below -15oC in Kansas, down to -20oC in Nebraska and South Dakota.

Such cold temperatures can be detrimental for wheat crops, causing plant deaths, and poor performance in spring.

The arctic forecasts created bullish sentiment in US wheat markets, with CBOT prices lifting 3.26% on the 16th of February.

A key factor to consider with regard to the significance of the forecast US weather events is the intersection of the dangerously cold weather, and where the wheat crop is growing in the US.

Over the last five years, the central US states of Kansas, Colorado, Nebraska, South Dakota and Oklahoma collectively represent about 48% of the US winter wheat crop on average, all areas which are expected to be subjected to the extreme temperatures.

Another nuance of analysing news about northern hemisphere winter wheat is that snow cover on dormant crops provides an insulating layer that can protect the young plants from extreme winter weather. The key states of Kansas and Colorado, which typically grow 34% of US winter wheat might be very susceptible to damage due to minimal snow cover of under 2.5cm (Figure 4)

Given that the USDA has tipped US winter plantings to be 5% above last year, the total winter crop could reach 33 million metric tonne (mmt). As such, Kansas and Colorado’s share would be around 10mmt. To put the production risk into perspective,  a 20% hypothetical reduction in wheat output from these states would equate to 2mmt, or around 4% of annual US wheat production.

One of the problems with speculating on the impact of the cold weather however is that gauging any significant freeze damage that has occurred to winter wheat is hard to assess until the dormant crop begins growing again. Since the big reactionary rise on CBOT, the December futures contract has since fallen back  2% to US$237 (Au$305 per tonne) as less dire forecasts for the next two weeks have been released, and traders reassessed what the information all means.

The cold snap in the US can kill crops, which gives reason to the rise in US wheat markets. Indications are that snow cover, which protects crops from intense cold events in some of the key US winter wheat growing states is minimal. The key growing states of Kansas and Colorado may have experienced significant damage. Any damage will reduce the size of the US winter wheat crop. All this is speculative until we see reports on the ground about the severity of the actual impact; and the market pullback of 2% today indicates that sentiment may have changed to view yesterdays price jump as an overreaction. 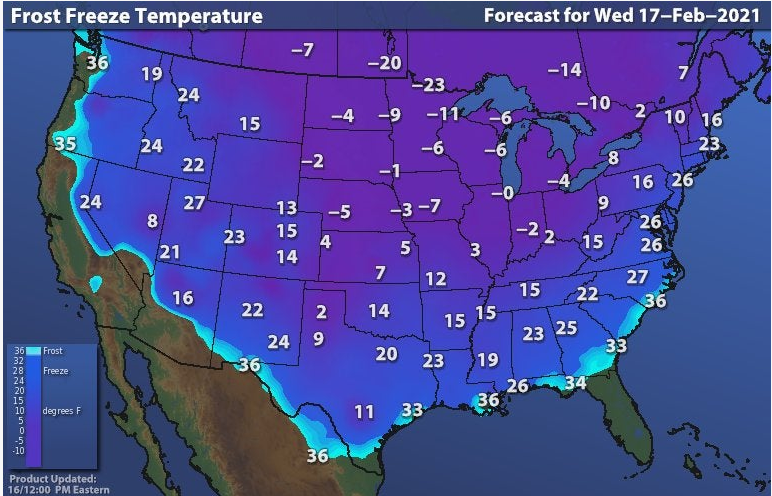