As always, there has been plenty of focus on everyone’s favourite cattle indicator recently, as it lost more than 100¢/kg over the past month. The Eastern Young Cattle Indicator fell below $10/kg for the first time since September this week, due to a ramping up of supply (latest weekly figures has east coast yardings up 22% year-on-year) and the winter weather meaning cattle are being presented in “secondary” quality condition, according to Meat and Livestock Australia. But what’s happening with the international influences of our domestic beef market?

Firstly, it’s important to note that the EYCI, at 1006¢/kg, is still historically very strong, closing last week 8% higher year-on-year. The 90CL, the US imported lean beef price, has also dipped slightly in recent weeks, after it hit its record peak of 919¢/kg in March. But it too remains historically strong, starting July at 878¢/kg (Australian), and has increased much more year-on-year than the EYCI, at 22%.  As we can see from Figure 1, the 90CL beef price has been generally following the same price trend as the Australian cattle market since the seasonal turn around.

Looking at supply into the US, an increase in supply from New Zealand, and the continued increase in Brazilian product, has offset lower Australian availability. The latest Steiner Consulting Group US Market report notes that historically at this time of year, when US cow slaughter declines, Australia was the only “significant source of lean grinding beef at this time of year”. They also report plenty of lean beef in importers inventory, having been built up in the first half of the year when supply looked like it might be lacking. That said, this is seemingly only short term, with no significant sustained supply pressure on prices on the horizon.

The Eastern Young Cattle Indicator overtook the 90CL price in mid-2020 and has maintained a premium over the US indicator ever since.  (figure 2) While it is not unheard of for the EYCI to rise above the 90CL, especially in times of good seasonal conditions and herd rebuild in Australia (the previous period of EYCI premium of 90CL was 2016-17), both the extent of the price difference, and the amount of time it has maintained, is unique. The current difference is just shy of 130¢/kg, in favour of the EYCI, it’s tightest premium since June last year.

With the Australian herd still considered in rebuild mode in terms of female slaughter, and rising inflation has US consumers turning from steaks to hamburgers, the 90CL price seems to be fairly free of significant downward pressure at the moment, which should go some way to continuing to support Australian domestic cattle prices and offset some of the local impacts. 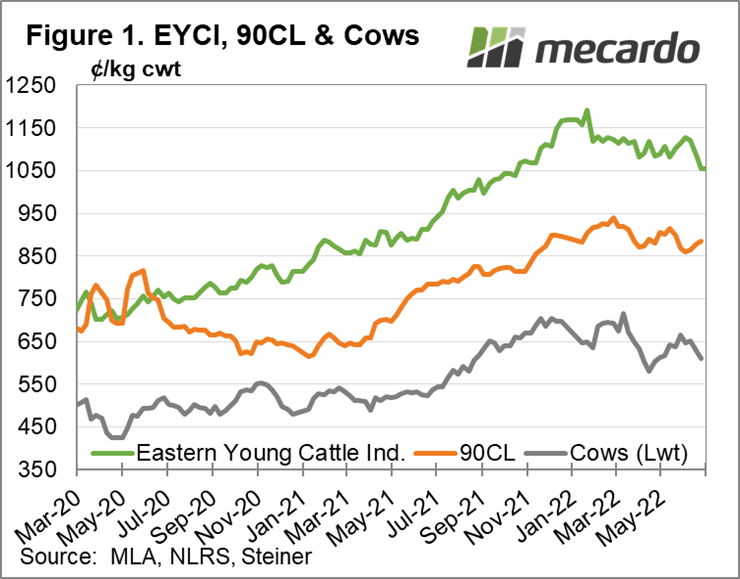