Beef processing in the US is under pressure as demand outstrips supply, pushing the 90CL price more than 100ȼ/kg higher since Easter. Labour shortages, import conditions and a cyber-attack on processor JBS have led to low volumes of beef on hand in the US, while the seasonal summer increase and foodservice resurgence has meant demand is booming.

US wholesale ground beef prices have risen significantly since March, according to the Steiner Group, as restaurant performance in the country reaches record highs with more and more of the population vaccinated and ready to enjoy post-pandemic freedom. Steiner reports the USDA quoting 73CL coarse ground beef up 90 per cent on mid-March and 81CL ground beef 84 per cent higher in that period. The latest choice cut price data out of the US shows the wholesale value at 421.5 cents a pound, up 90ȼ /lb since January.

Australia’s 90CL indicator (frozen lean meant to the US), which lost ground for most of the second half of 2020, is now back on-par with this time last year, at 761ȼ/kg, having climbed 16 per cent since the beginning of March. The price for imported 90CL frozen beef in the US was 7 per cent higher than domestic fresh 90CL product in April.

Cattle processing has ingrained labour issues across the globe, but the impact of Covid-19 was felt by particularly hard by processors in the US. Reports on infection rates estimate between 6 and 8 per cent of all Covid-19 infections in the US (up to July 2020) came from within the meat processing industry (Proceedings of the National Academy of Sciences of the United States of America). To put this into population perspective, there were 16,000 meat workers infected in the US by May 2020.

Supply was further restricted by the cyber-attack on JBS last week. JBS is the world’s largest meat processor, and its five biggest plants reside in the US, processing close to one-quarter of the country’s beef. Add in a national holiday, and total cattle slaughter in the US last week was down 15 per cent from the previous week.

Total meat (beef, pork, chicken and turkey) in cold storage in the US was also 18 per cent lower year-on-year and 16 per cent below the five-year average as of the end of April, according to Meat and Livestock Australia. US cattle on feed as of the start of May was around 11.725 million, or 4.7 per cent more than the same time in 2020 – meaning processing capacity, not cattle numbers, are causing supply issues. And long fed cattle numbers are up, as are average-fed cattle weights, increasing the need for lean meat – such as the 90CL which comes from Australia.

However, Australia has supply issues of its own (cattle supply, not beef processing capacity) and for the year-to-May sent 44 per cent less beef to the US year-on-year. And now China’s beef demand is back, they are also finding supply hard to come by. As well as taking less beef from Australia this year (China has taken 17 per cent of Australian beef exports so far this year, compared to nearly 25 per cent in 2019), the 30 day beef export halt in Argentina will likely push competition from China higher, as more than three-quarters of all Argentine exported beef is usually headed their way.

Higher global beef demand, competition and in turn prices can only be positive for Australian producers, as the added competition will keep domestic returns supported once the herd has rebuilt beyond a restocking frenzy. And while it hasn’t resulted in higher cattle prices in the US just yet, it is expected it will flow through in the spring, which may assist in bringing Australia’s high cattle returns back in line with the global market. 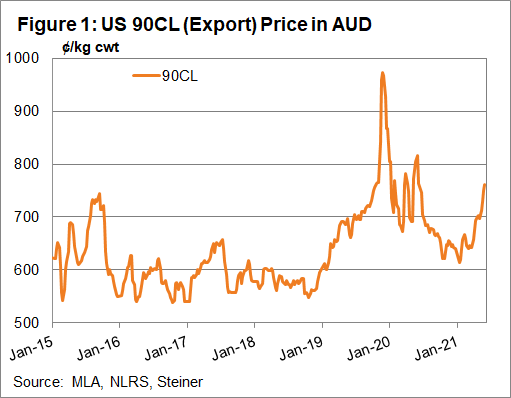