Fine merino prices continue to be the focus of demand in the current market, albeit with a knitwear slant. The relative price of different micron categories is sensitive to changes in supply, but does seem to have some upper limits. This article takes a look at likely upper limits for the micron price curve.

Micron premiums and discounts are volatile, as the experience of recent decades has shown.  The industry has swung between the “micron madness” at the turn of the century to despair in 2015, after series of years when micron premiums were rock bottom. Among the gyrations in micron premiums and swings in sentiment, the average merino fibre diameter has trended lower in the past three decades, as farmers responded to the increased value in fibre diameter.

The modern wool market with increased (on average) micron premiums and discounts appeared in the 1980s – as a consequence of a combination of the objective measurement of wool introduced in the 1970s, containerisation which allowed tightly specified consignments of wool to be delivered with confidence and falling fabric weights, which required finer micron wool to make.

Figure 1 shows the price premium between the micron category two microns finer than the average merino micron and two microns broader (roughly a standard deviation either side of the average micron) from the late 1940s through to April 2021. The early data is calculated using some key assumptions, while the data from the mid-1990s onwards is drawn directly from auction data. The premium starts to pick up in the early 1980s and by the end of the 1980s had risen to unprecedented levels. Prior to 1980 the premium had averaged 23% in the preceding three decades. Since 1980 the premium has averaged 50%.

In Figure 2 the four micron premium is shown in nominal Australia cents per clean kg terms, for the same period. Inflation renders a direct comparison across this timeframe meaningless, but the peak levels of the premiums (in the range of 800 to 1000 cents) have been relatively consistent since the late 1980s. This implies there is some threshold in terms of how processors see the market, and their upper limit for the premiums they will pay for fine versus broad merino. The premium in the current market (for 17 versus 21 micron) is above 900 cents and pushing higher, so it is well in line with previous cycles. Past cycles indicate the market is somewhere near its upper limit, although in 1988, 2000 and 2011 the premium did exceed 1100 cents so there is potential for further rises but don’t budget on them for next year.

The recovery from drought in eastern sheep regions since early 2020 has pushed the merino (and crossbred) clip broader which has reduced the supply for fine merino wool, increased the supply for broad merino wool and in doing so helped to increase the micron premiums and discounts in the greasy wool market, to levels on par with past cycle peaks. From a risk perspective, the outlook is for smaller premiums in 2021 and beyond as these premiums rarely hang around for long. There seem to be some fine merino wool in the farmer stockpile which should take advantage of these premiums (and price levels). 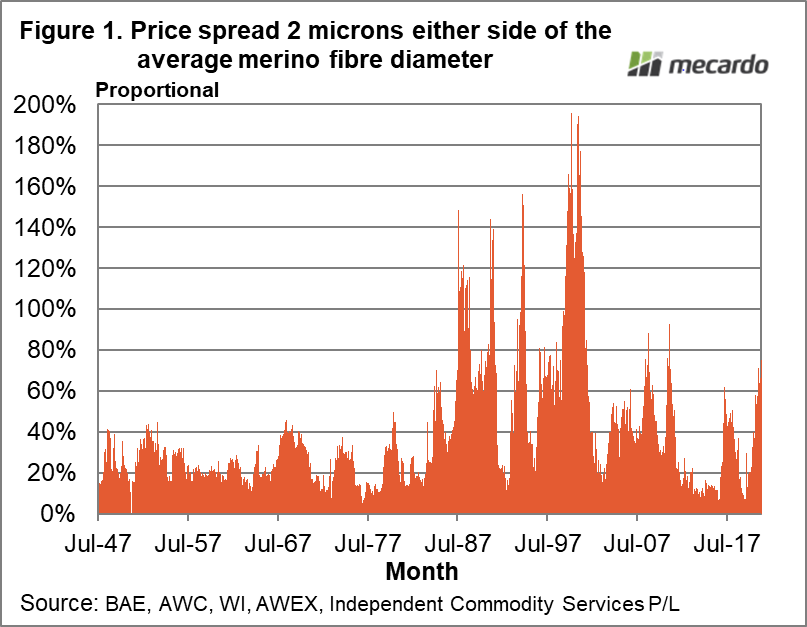 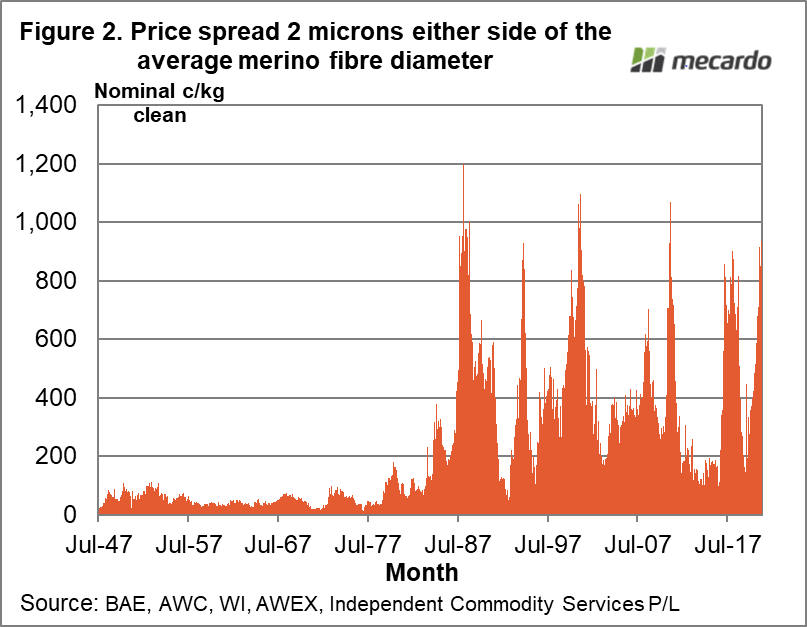