The strengthened Australian dollar and domestic cattle price are impacting not just beef export markets, but the live cattle trade as well. Despite nearly 11,000 more cattle being exported in August compared to July, overall export volumes for the year to August, the latest figures available, have dropped by 10 per cent.

But in a year of volatility for live export prices – having reached record highs in March before dropping dramatically in April/May – some stability seems to have returned. The Darwin live feeder steer indicator has been trading at 355¢/kg for the past three months, an increase of 12% on the same period last year.

Australia’s largest market for live cattle, Indonesia, has imported 25% less feeder cattle, 72% less slaughter cattle and 83% less breeding cattle for the year to August, a total year-on-year drop of 27%. The Covid-19 pandemic hit the country hard earlier in the year, just prior to the usual high-turnover period of Ramadan, leaving their feedlots full of cattle during lockdowns, which could be impacting on their demand for both feeder and slaughter shipments. Team that with Indonesia’s local currency dropping to a 20-year low in April, and still recovering, and it’s no wonder less cattle have been heading their way.

So where are they going? Well, to Vietnam. They’ve imported 28% more live cattle from Australia for the year to August compared to 2019, with slaughter cattle imports specifically up 32%, in complete contrast to Indonesia. In fact, the year-to-date total of Australian live cattle to Vietnam is at its highest level since 2015, and prices are historically strong, with the slaughter price to that country sitting at $3.50 ex-Townsville, according to Nutrien Ag Solutions. This demand has come about due to pork supply shortfalls (African Swine Fever) and fewer live cattle available from other regional countries.

There’s no indication that domestic feeder cattle prices are going south anytime soon, with supply still tight. Historically the live export price is strong, with similar levels last seen during the previous record domestic price run in late 2016/early 2017. That said, the Townsville live feeder steer indicator is averaging more than 60¢/kg below the Queensland saleyard feeder steer indicator for the month of October, which indicates there is still upward price movement available for live export cattle. But will our south-east Asian markets be able to afford them? 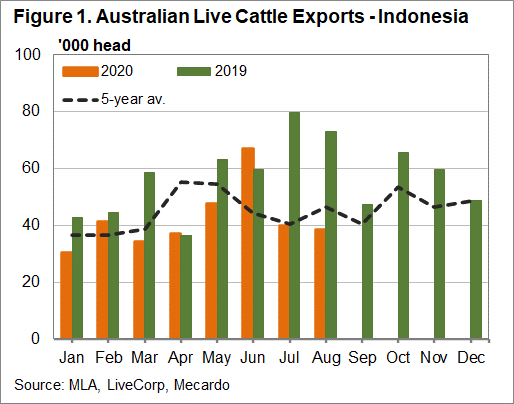 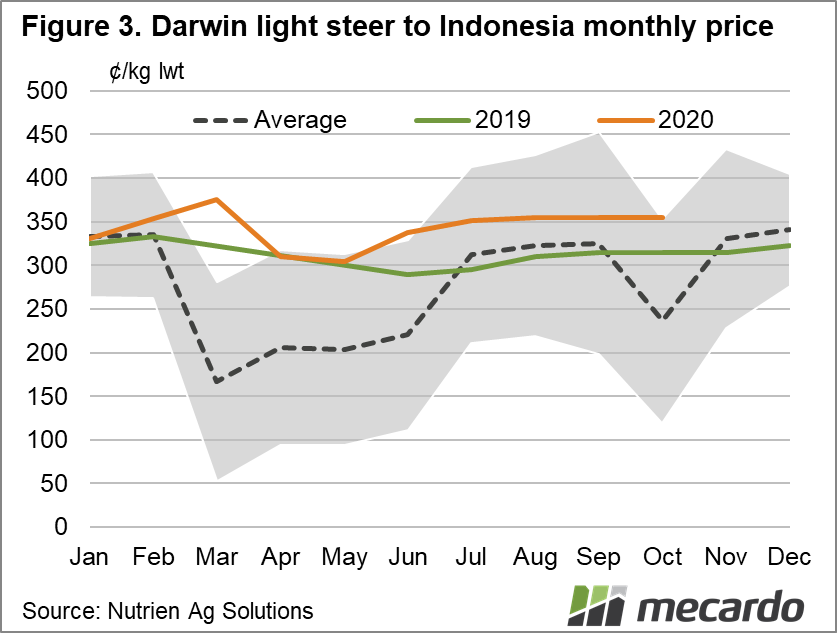