Last week Mecardo looked at the supply of vegetable matter (VM) in the Australian wool clip and how it was tracking past seasonal patterns. This week we take a look at the discounts for VM in merino fleece.

Removing vegetable matter out of raw wool is a conversion cost, not a quality issue such as fibre diameter, staple length/strength/ mid-point break or colour/stain. There is a cost to taking VM out of wool, at which some mills have great skill and others do not. The bulk of the wool clip is generally under 2% VM, so machines are set to accommodate this level. When the VM in the clip increases it causes processors, who are not prepared to adjust their machines, to pay more for low VM wool and to neglect higher VM wool.

As the article showed last week, VM levels are following a seasonal pattern where they rise in the second half of the season. Teasing out the premiums and discounts applicable to VM requires removing (as best can be done) the price effects for other factors. For this article, eastern merino fleece, with a staple length of 70 to 95 mm, staple strength 33 to 37 N/ktx, no subjective faults and P certificates sold at auction was used to generate Figures 1 and 2. In addition the data was collated into quarterly units (three months) of time.

Figure 1 shows the quarterly price effect for 20 micron fleece, up to 5% VM. Out to 1.5% VM there is little effect on price. Beyond 1.5% the effect increases, with this effect intensifying in recent quarters for the 2% to 4% VM range. This is the effect of increased VM levels in action with discounts effectively doubling since late 2020. The increased VM levels have been compounded by markedly increased production of broader merino wool (view previous article here). While the discount for 5% VM has widened, it has done so marginally.

In Figure 2 the same analysis is carried out for 17-micron merino fleece. The difference here is that supply is down and demand is very strong for fine merino wool. For 17 micron the price effect of VM is fairly neutral out to 3%, starting to cut in at the 4% VM level. Note how the discount for 4% VM has not widened out markedly as it has for the 20 micron category.

In the past Mecardo has looked at VM levels in different micron categories, showing how the broader merinos often have higher VM levels. With this in mind, as an explanation for the higher discounts seen in the broader merino micron categories, Figure 3 shows the average VM for 17 and 20 micron merino wool sold this season by month. 20-micron wool did have higher VM levels in late 2020 but since March the levels in 17 micron have been higher or the same. It seems it is simply the imbalance between overall demand and supply which is causing buyers to be more choosey when buying broad merino wool, applying higher discounts than for the finer micron categories.

Removing VM is part of the cost of converting greasy wool into top. When demand outstrips supply as it is currently doing for fine merino wool, this conversion cost can be overlooked to an extent. For broader merino wool, where supply is more than ample, the increased VM levels are being heavily discounted. These discounts should extend well into the spring, until the supply of low VM wool starts to pull the average VM lower. 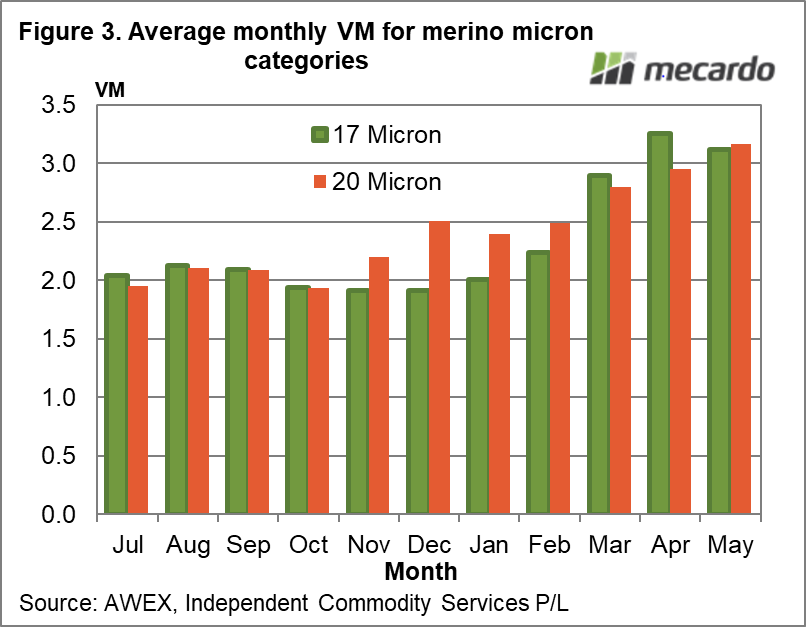