It was noticeable that Chinese demand remained subdued this week and this was reflected in a generally sluggish wool market. The reported concerns related to energy and power supply in China has dampened demand and caused processors to take a cautious approach to greasy wool purchases.

The Eastern Market Indicator (EMI) fell 16ȼ or 1.2% for the week to close at 1,323ȼ. The Australian dollar was stronger in all currencies this week with the US/Au rate settling at US$0.737, which resulted in the EMI, in US dollar terms, posting a 4ȼ fall to settle at 971ȼ.

Fremantle selling last was reported as “steadying” late in the last day of sales, however the Western Market Indicator (WMI) gave up 21ȼ cents to 1349ȼ. Fremantle sold 5,672 of the 7,072 bales offered with 19.8% of offered bales passed in.

The AWEX reported the strong finish in Fremantle sales on Thursday, provides some positive sentiment for next week’s sales.

The crossbred indicators were all cheaper, with the 26 MPG again the weakest performer losing 26ȼ for the week. The exception was the 32 MPG which lifted 5ȼ, however 28 & 30 MPG were down 15ȼ &5ȼ respectively.

Cardings were again cheaper in all centres, Fremantle was down 30ȼ, while in Melbourne the indicator fell 3ȼ and 18ȼ in Sydney.

This week on Mecardo (view article here), Andrew Woods reviews the premiums & discounts applied to wool as a result of staple strength. Staple strength is nowhere near the terror of the market it has been in the past although a staple strength around 38 N/ktx tends to be the threshold for access to RWS premiums and some specialist Italian contracts in the current market, but achieving these prices depends on more than staple strength. 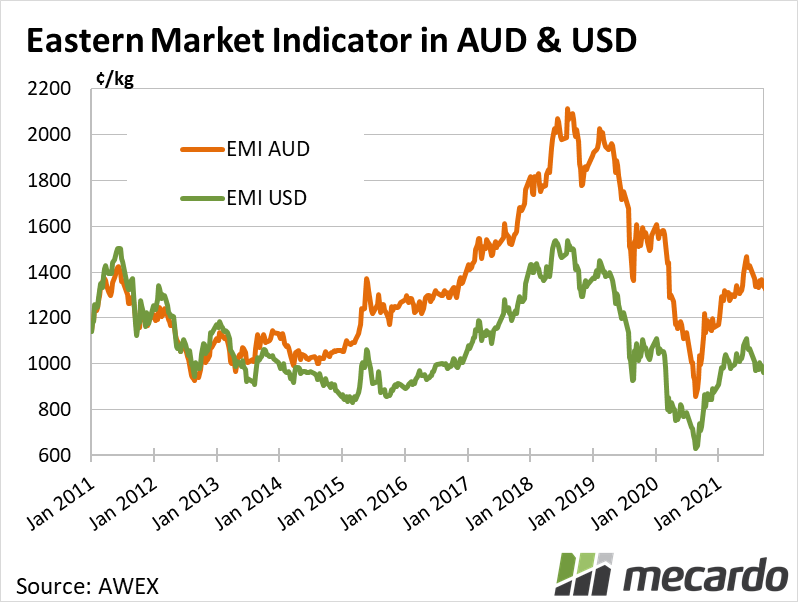