Volatility dials it up a notch or two

Another week, another raised bar for volatility. The wild swings we are seeing, all precipitated from the war in Ukraine, are creating uncertainty and disengagement in the trade. The gap between the futures market and the cash market continues to be distorted, to the point where the trade are stepping aside. The market, designed to be a place to manage risk, is simply becoming too risky.

Open interest in the wheat bourses (CBOT, KBOT etc.) has been steadily declining since the outbreak of war, and the shallow volume of buyers and sellers, exacerbates the volatility.  Add to this the inaccurate and sometimes misleading information coming out of Ukraine, is simply creating headlines that trigger violent two-way action.

Take for example, this week when news emerged that Russia would ban wheat exports to some countries, the market moved higher.  Over the weekend, headlines suggested some ground had been made on a ceasefire and the market locked in an 85ȼ/bu limit down move.  Less than 24 hours later, after  Russian troops targeted civilians, the market bounced 39ȼ/bu.  All this in three trading sessions.

Unfortunately, it is looking increasingly like we will see both warring sides get bogged down in a meaningless, dragged-out war.  Putin, under siege by a war that has not gone as he had thought and crippled by severe economic sanctions, is doubling down.  Zelenskyy has seen his country suffer enough to not roll over and bow to Russia’s terms.

If the war drags on, it is hard to see Ukraine’s crops re-entering the export grid.  Russia has blockaded its ports, so the only supply chain open to Ukraine is via rail.  The fate of the spring sown crops is also in doubt as shortages of crop inputs and labour, as well as trying to sow during a war, have some analysts suggesting crop output only 60-70% of potential.

Russian wheat, while it has slowed, is flowing freely again through the Black Sea.  Russian analyst Andrey Sizov suggests that while ocean freight rates and insurance risk premiums are climbing, the weaker Rouble and high demand for Russian wheat, is seeing trade pick up again.  People need to eat and the relatively cheap price of Russian wheat is circumventing economic and ethical pressure.

While the focus will remain on the Black Sea, we are moving into a historically volatile weather driven period as winter sown crops emerge from dormancy and spring sowing gets underway.  It will not take much of a threat to production to generate a tail wind to an already fast paced market. 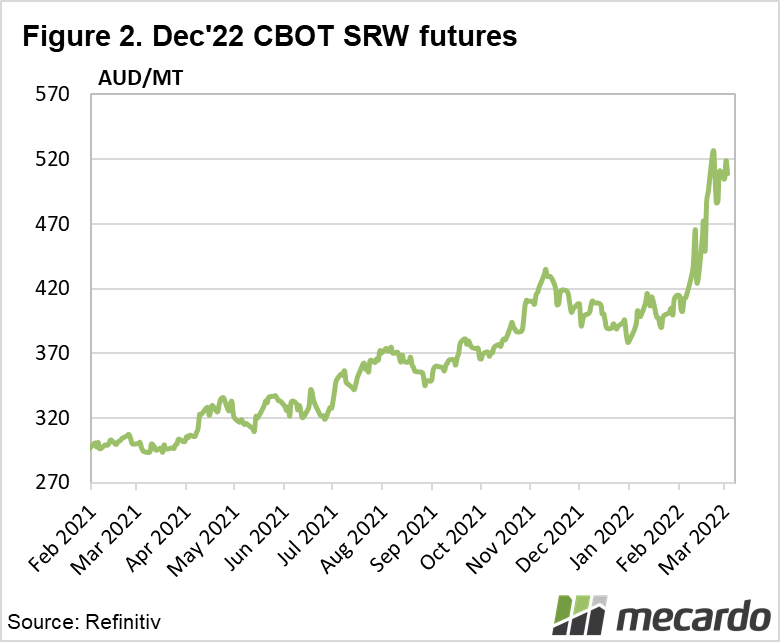