WASDE brings prices back into line

The latest United States Department of Agriculture (USDA) World Agricultural Supply and Demand Estimates (WASDE) brought the bull market to a halt last week. The USDA pegged production of the major cropping commodities higher, which gives us a very rough idea of where prices might head as we move forward.

The May WASDE is always one of the most anticipated, with the first projections for the new crop released by the USDA.  While there will inevitably be major changes to the forecast before the world crop is in the bin, it does give an early indication of how the USDA think current prices have impacted planting decisions.

Figure 1 shows the year on year changes in production, consumption and ending stocks for wheat, corn and soybeans.  Wheat is the commodity that hasn’t seen major supply and demand issues in recent times, and the price increase has been on the back of corn and soybean problems.

Hence wheat production isn’t expected to increase much, and consumption rising in line with the usual trend. Steady ending stocks and rising consumption leads to a small decline in the stocks to use ratio to a five year low, but it’s still high in historical terms (figure 2).

The higher corn prices we have seen in recent times is expected to see a strong jump in production to record levels.  Figure 3 shows the jump in production is not matched by increased consumption, with ending stocks and stocks to use creeping higher.

Oilseeds is where much of the action and uncertainty will be again this year. Figure 4 shows that despite a forecast 5.4% increase in production to record levels, rampant demand sees only a slight increase in stocks to use.

Soybeans are expected to account for 61% of the global oilseed crop, while rapeseed/canola makes up 12%.  Rapeseed/Canola is only expected to rise by 3%, compared to soybeans being up 6%, which in theory could add a little to the premium for canola.

Interestingly barley is one of the commodities which is expected to have a fall in production this year, down 2% with plenty of that accounted for by a 23% fall in Australia.  At 157 million tonnes of production, barley accounts for just 11% of global coarse grains, but declining supply should see barley rise relative to corn over the coming year.

Increasing supplies in the WASDE have stripped much of the risk premium out of new crop futures. For corn, the CME March 2022 contract is at similar levels as the spot contract stood in March this year.  March 22 Wheat is around 5% higher than the spot price in March 21, with some risk premium priced in, and soybeans are also at a small premium to March spot values.

Aussie growers looking at doing some forward pricing should be comfortable in the fact that prices are reflecting fair values given the production outlook.  Given the tight stocks, especially for oilseeds, there is still room for prices to spike higher and for growers to achieve some even better prices for the new crop. 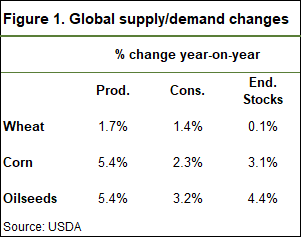 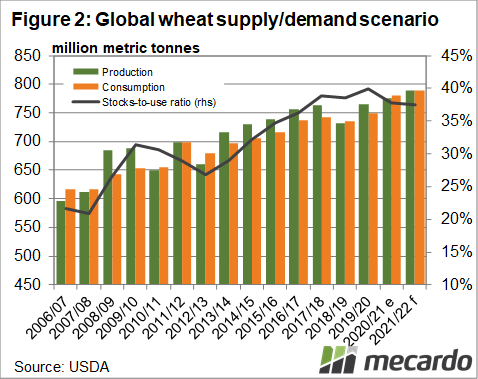 Weather rains on the corn bulls

It never rains but pours, seems an apt analogy for the weather in the US at the moment. The much-awaited rains forecast in the US How consumers can use cheap basis

A fortnight ago we took a look at local wheat prices with the conclusion that they were good in absolute terms, but not in relative

What goes up, must come down.

There has been a car crash in the ag markets this week as the weather forecast for the US turned wetter for key Mid-West states.