The Australian wool market continued to decline this week, although AWEX reported that there were positive signs in the final selling day at all three centres. The early falls for the week were not fully recovered by weeks end, however there was a noticable increase in buyer confidence resulting in stronger bidding by the close of sales.

The Eastern Market Indicator (EMI) again fell, this week by a modest 9ȼ to close at 1,375ȼ. The Australian dollar continued to strengthen, although just marginally to be quoted at the end of the selling week at US$0.7507, which settled the EMI in US dollar terms down 5ȼ to 1032ȼ.

The Western Market Indicator (WMI) also fell in Aussie dollar terms, giving up 6ȼ to finish the week at 1418ȼ. While the WMI was quoted down, all WA MPG indicators actually lifted with the exception of 20 MPG and the Cardings.

In Melbourne & Sydney almost all indicators were quoted cheaper than last week. The falls however we minor for the fine end of the market, with Sydney posting marginal falls across the board.

Crossbred wools followed the easing trend with prices down between 8 & 14 cents. Cardings in Sydney were also cheaper, easing 13ȼ, while Melbourne was down 12ȼ & Fremantle down 9ȼ.

The national offering this week remained steady on last week with 44,722 bales coming forward this week. The national pass-in rate was slightly lower at 13.1% resulting in  38,862 bales sold, just over 1,000 more than last week.

AWEX monthly auction figures report that for March total auction volumes were up by 1% over the February offering, however the increase was constrained to the 20 MPG and broader, with fine wool volumes actually lower month on month.

This week on Mecardo Andrew Woods took a look at VM levels in the wool clip. Mecardo has regularly covered VM levels in the Australian wool clip as it varies with seasonal conditions and can become an important factor which is discounted at auction. The relative scarcity of 0-1% VM wool this season, especially for the broader merino microns, has exporters struggling to meet consignment VM averages so demand has focussed on the low VM lots with a reduction in demand for the 2% plus VM lots which means wider discounts.

Next week all centres are selling on Tuesday & Wednesday only, with 49,206 bales rostered for next week. 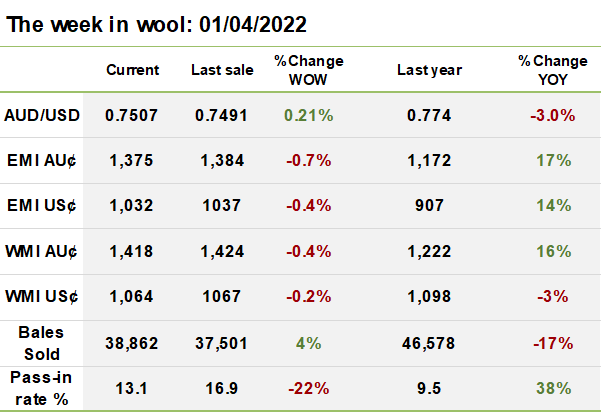 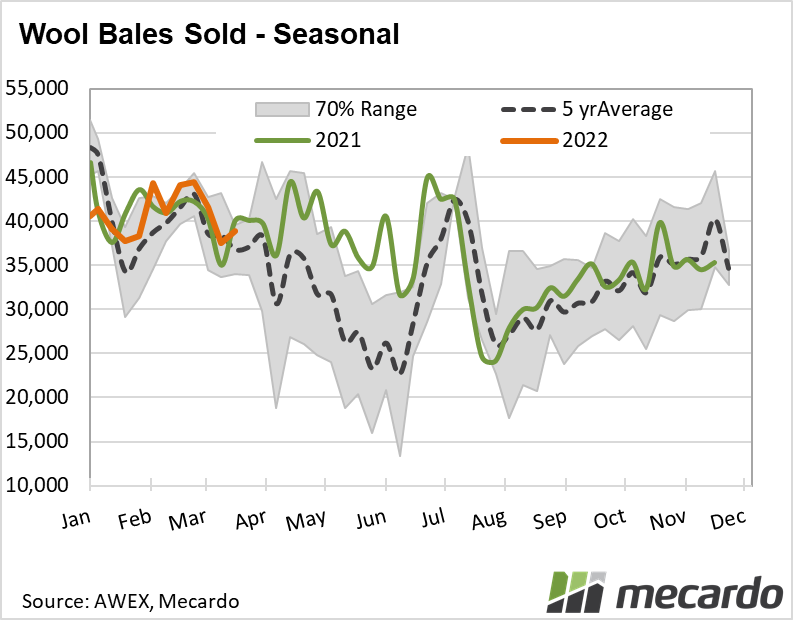