The wool market was again showing a weaker tone across the week with buyer sentiment remaining subdued. AWEX noted that the final day there were “positive signs”, with Fremantle selling last showing an overall gain for the series.

Across the week, the Eastern Market Indicator (EMI) gave up 18ȼ to settle at 1,332ȼ. The Australian dollar was stronger at US$0.731, which resulted in the EMI, in US dollar terms, easing by just 4ȼ to 974ȼ.

Fremantle returned to the selling roster selling 5,402 bales of a total offering of 7,761, with the Western Market Indicator (WMI) lifting 5ȼ cents to 1356ȼ.

The national offering increased on last week after 8.8% of the roster were withdrawn 35,119 bales were offered, almost 7,000 more than last week. With a further 20.7% of the offering passed in, over the two-day sale in Melbourne & Sydney 27,364 bales were sold. This was 3,764 more than was sold last week.

The corresponding week of sales last year proved to be the low point of the market as Chinese mills were still grappling their CV-19 issues. AWEX reported that the EMI is 474ȼ or 55% higher than this time last year, a notable result in uncertain times.

While the whole market has improved year-on-year, it is the fine types which are the stand outs. 18.5 MPG’s and finer are on average 78% higher. As an example, the 17 MPG is 1,085ȼ higher, a remarkable 81% lift over the year.

The crossbred indicators again showed little movement, with the 30 MPG down 4ȼ while the 32 MPG lifted 12ȼ.

Cardings were cheaper in all centres, falling 22ȼ in Melbourne, 20ȼ in Fremantle and 10ȼ in Sydney.

This week on Mecardo, Andrew Woods looks at the latest AWTA wool volume data to August (view article here). The supply pressure which helped lift the micron premiums for fine wool, continues (at a lower level) for sub -17 micron merino wool. The pressure remains in broad merino wool, so the gap between the 21 micron and 19 micron categories is set to remain wide for the time being. Crossbred prices, which continue to struggle, have plenty of supply coming into the market so there is no respite coming from the supply side of the market.

Next week an offering of 37,124 bales are rostered, with Fremantle, Melbourne & Sydney all selling on Tuesday & Wednesday only.

Based on the later sales of the week, the market may find these levels as a base subject to a stable Au$. 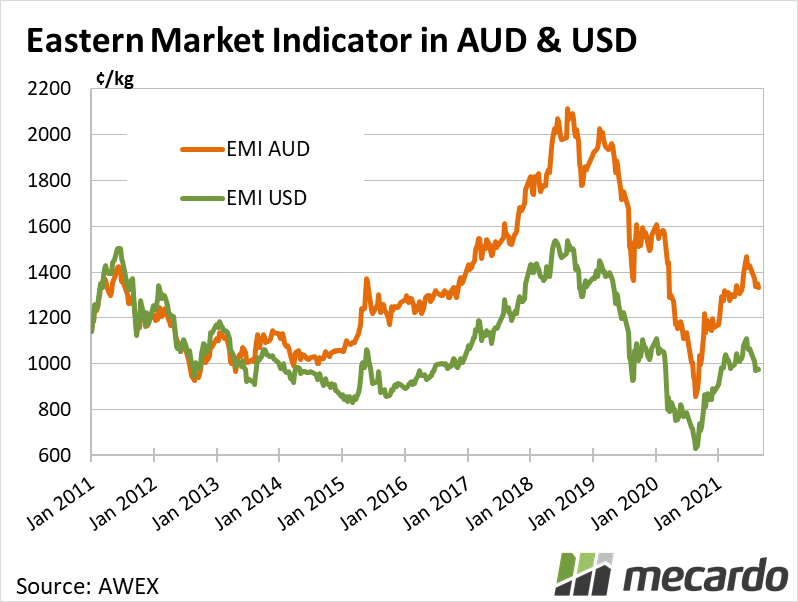 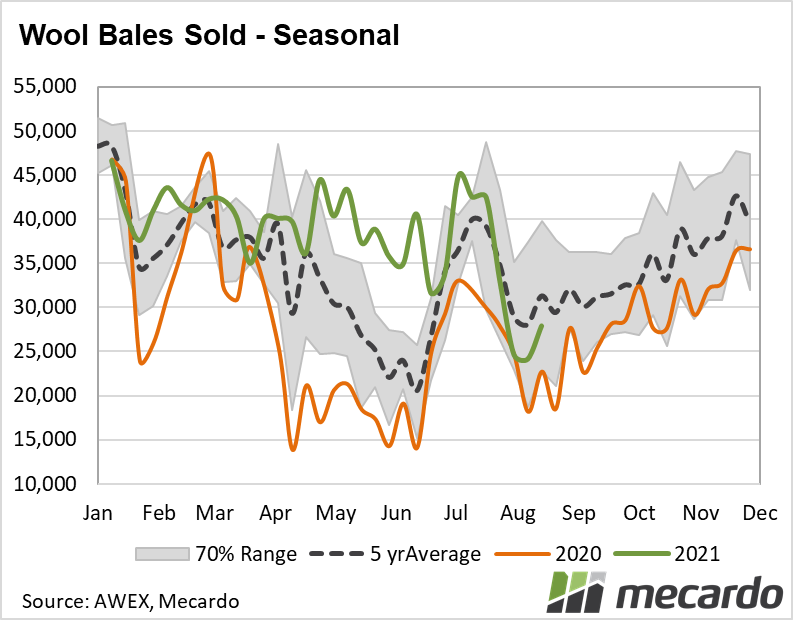