There was a fair bit of excitement in the lead up to the southern weaner sales last year, as the Western Victorian and South East SA autumn calvers finally got their bite of the extreme price cherry. This year it’s going to be even more extraordinary, posing a huge problem for producers, that being the paying of tax.

About twice a week I drive past the local Toyota dealership’s shed where they put the trays and bullbars on new Landcruisers and Hilux’s.  While there is usually a few parked out the front, after the weaner sales last year, and all the way up to the end of June it seems like hundreds of utes went through the yard.

It was all part of dealing with the extra cash from fantastic livestock prices, taking advantage of the governments instant deductions.  Now there is hardly a vehicle in there, not because they’ve stopping being bought, but because they are taking nearly a year to arrive!

With the wet summer in NSW and Queensland the northern buyers will be here in force, and we only have to look at Auctionsplus recently to see that 700-750¢/kg lwt appears to be the benchmark for Angus steers under 300kgs.  Prices drop as cattle get heavier, with those at feeder weights around 450kgs making 550¢.

Believe it or not, weaners have actually gotten cheaper in the last two months, but only in a relative sense.  The Eastern Young Cattle Indicator (EYCI) has gained 75¢ to hit 631¢/kg lwt, while weaner prices have remained steady.  On that measure, figure 1 shows that weaners were a little more expensive back in 2019.

The benchmark dollar per head rate for weaner steers at the moment looks like it is $2,100, with feeders making $2,500, with the backgrounder happy to use grass making the $400 gross margin.

At current weaner and feeder weights backgrounders will do ok out of buying weaners, as shown in figure 2.  Making $400 before costs eating excess grass isn’t a bad trade.  There is always risk, and at record prices it is amplified.  Figure 2 also shows what happens if feeder prices drop back to 500¢/kg lwt, and at that rate backgrounders will be doing it for nothing, or worse after costs. 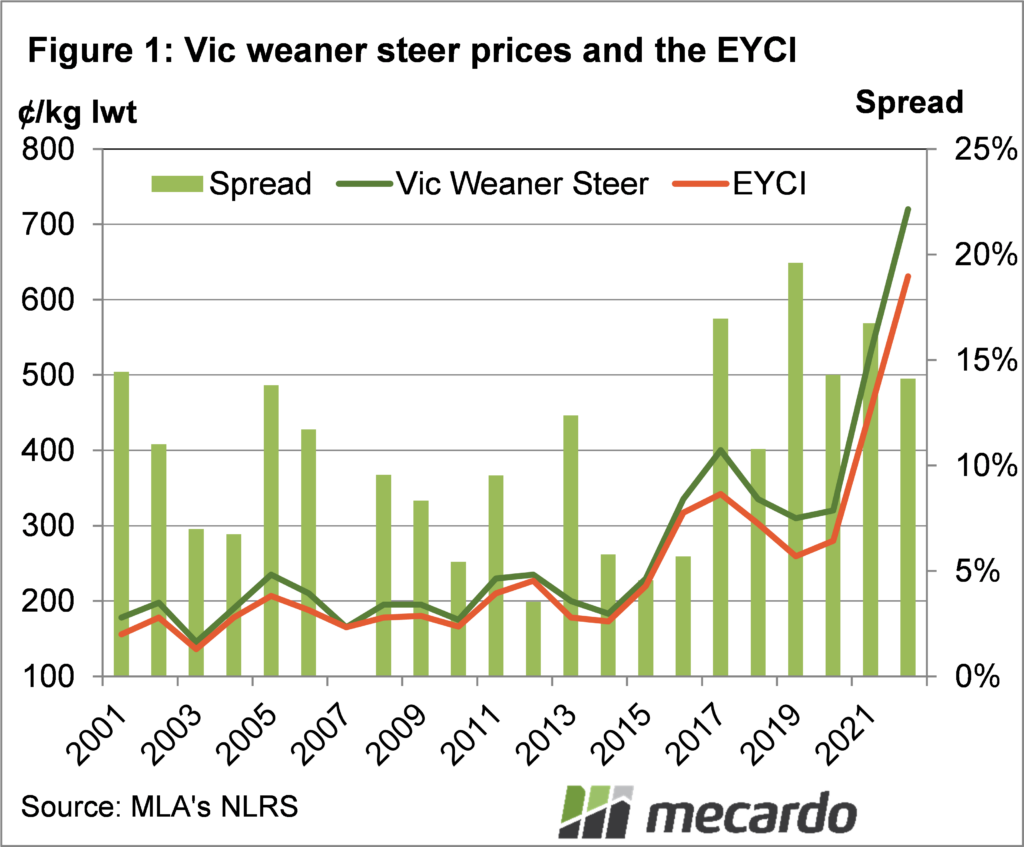