While wet weather in the north had the impact of reducing supply somewhat this week, bidding activity was subdued overall, with the EYCI losing some ground, but prices for finished animals firmed. The rising Aussie dollar spells trouble for the 90CL price over the next 18 months if the RBA continues increasing interest rates, but on the upside, US ground beef demand appears solid even in the face of heavy liquidation of the US herd in the short term.

On the balance, slaughter numbers came in on par with the prior week, sitting at 94,750 head for the week ending 3rd June, 2022.  Examining the individual states, there was not much news to be gleaned, with weekly slaughter statistics registering negligible change from the prior week. Of note though, is that slaughter is currently tracking at 9% above 2021 levels. Looking forward, there is usually an upward trend in the leadup to July, so if history repeats, we should see some increased demand from processors coming though in the coming weeks.

As expected, East coast yardings for the week ending the 03rd June 2022 increased 14% week on week to reach 37,844 head. The increment was all driven by a 36% surge in offerings onto  the QLD, market, assisted by a 93% increase in volumes in VIC. The mood was less enthusiastic in NSW however, where numbers on offer decreased 20%. Overall, yarding’s are  still 6% off the pace we saw at this time last year, so we remain in a tight supply environment.

This situation underlying this week appears to be one of reduced supply however, with EYCI eligible yarding’s decreasing 11% week on week to 10,681 head. Bear in mind though, that QLD saleyard activity was subdued by wet weather again, which caused yardings to suffer at Dalby and Roma, among others, with some reports of fairly inconsistent quality emerging at some saleyards this week.

The decrease in EYCI eligible supply was not sufficient to hold up prices though, with the EYCI falling back 9¢(<1%) to settle the week at 1,120¢/kg cwt

Over in the west, the WYCI advanced another 19¢(2%) to finish the week at 1111¢/kg, with price benefiting from a 61% contraction in in supply, with yardings plunging to 186 head. However, the index was heavily subdued by a massive decrease in the premium priced vealer weighting in the index, which dropped from 92% to just 56%. For comparison, western vealer steers traded at 1257¢/kg cwt- a 33¢ premium to the yearling steer price, while vealer heifers traded at 1070¢/kg cwt, and made up a 37% of the index this week.

The National cattle indicators depicted the opposite situation to last week, where finished animals benefed, with medium steer prices rising 8%, to 474¢/kg lwt, and heavy steers prices up 2%. In contrast, the wooden spoon went to restocker steers which dipped 2% to 688¢/kg lwt.

The US frozen cow 90CL price held its ground at 280¢US/lb, however, lost 10¢(1%) in Aussie dollar terms, closing the week at 859¢/kg swt, with the strengthening in the Aussie dollar in the week prior taking the sole blame for the fall. With the RBA announcing on Tuesday that the cash rate will be jacked up 0.5%, to stem inflation, the resultant appreciation of our currency will further weigh on the 90CL price next week.  The drought situation in the US has improved marginally in recent time, but pastoral conditions there are still considered to be in the worst shape for 30 decades, with the USDA’s grass report gauging that 44% of paddocks were in poor to very poor condition, compared to just 22% making a good to excellent rating.

US cow slaughter continues at a cracking pace, but Steiner reports that demand for lean ground beef is still solid, as evidenced by recent increases in prices for US domestic product, despite the substantial supply on offer.

This week saw some initial indications that producer enthusiasm to supply may be beginning to wane, but this is tempered by wet weather causing issues in bringing cattle to market. Historically, slaughter tends to increase towards the end of the financial year, which should benefit prices for finished cattle. On the restocker front, the wet conditions in QLD, if they are being accompanied by above average grass growth, may just spark additional interest in the coming weeks once conditions dry out enough to make reliable transport less of a concern. 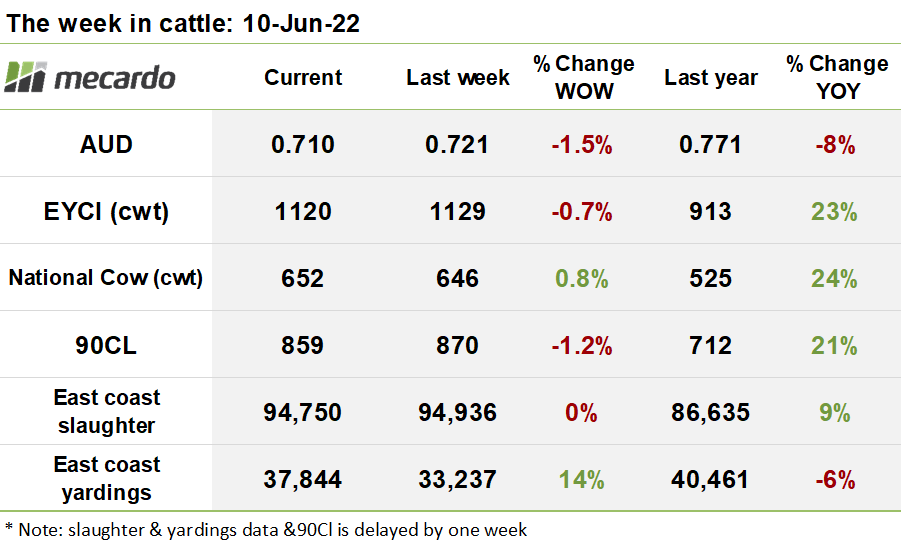 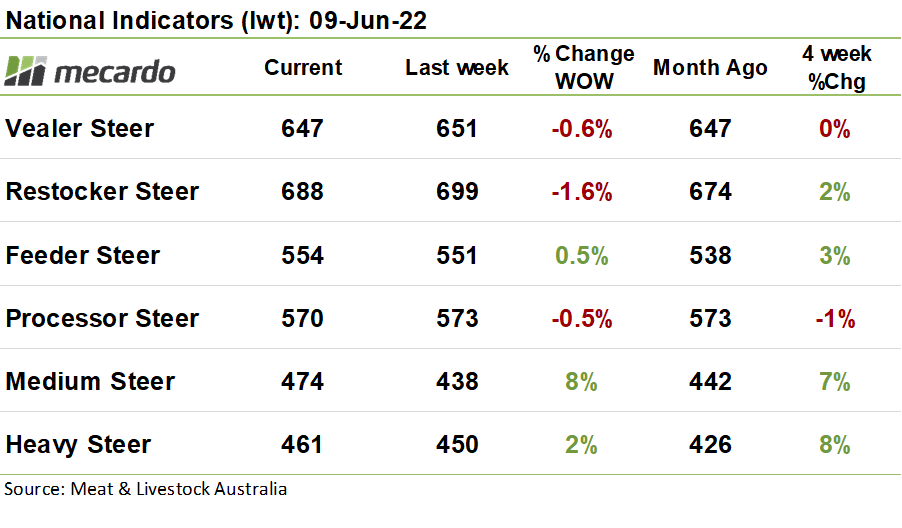