What goes up, must come down

What goes up, must come down (well, usually), and this was certainly the case for the Eastern Young Cattle Indicator (EYCI) this week. It fell 29¢ or 3.2% on last week to close this week at 877¢, just slightly above where it started off this month.

While there were still some saleyards where EYCI eligible cattle averaged around the 950¢/kg cwt mark, such as  Casino and Singleton in NSW, the biggest contributors from QLD were down, with prices at Roma and Dalby, 900¢/kg cwt and 850¢/kg cwt respectively. Processors managed to improve their lot by picking up 11% of young cattle on offer, up from 5% last week.

Yardings for the week ending 23rd of April 2021, stayed roughly the same as the week prior. 50,855 head were yarded on the east coast, 2% down on the week before but 11% above this time last year and still slightly above the five-year seasonal average.

Slaughter on the other hand was up 7% on the week, with a total of 101,573 cattle slaughtered on the east coast. Although this was still 22% down on this time last year, and well below the five-year average, reflecting the tight supply in the market still.

On the West coast, the Western Young Cattle Indicator also fell, but not quite as dramatically as on the East coast, slipping 14¢ to finish the week at 950 ¢/kg cwt.

The national category indicators displayed mostly red ink this week, with Restocker Steers again displaying the largest fall, while Vealer and Processor Steers were the only ones to see upward movement. Restocker steers fell 39¢ on last week to settle at 518¢/kg lwt. The biggest drop came from NSW which fell 108¢, still up 28¢ on this time last year, however. Processor Yearling Steers in contrast rose 21¢ on last week to finish this week at 472¢/kg lwt. The biggest lifts for this category came from Victoria and NSW, rising 32¢ and 9¢ respectively.

The Aussie dollar jumped up 0.2% to finish the week at 0.776USD despite a strengthening in the US dollar. High Iron Ore prices have been supporting the aussie dollar, which will most likely provide continued support in the coming weeks. The 90CL frozen cow price lifted by 2¢ (1%), to 702¢/kg AUD, with continued low exports of Aussie beef supporting high export prices.  The last time the 90CL was above the 700 cent mark was in June last year.

The BOM is forecasting a relatively wet week next week, especially across parts of Southern Australia with forecasts of up to 25-50mm for parts of Eastern Vic and NSW and up to 25mm in South Western WA. Not much rain is predicted up north with only 5-10mm forecast along the coast, a welcome reprieve for some parts of QLD which have copped their fair share recently. The rain will be welcome where it falls in the South after a relatively dry April there so far. 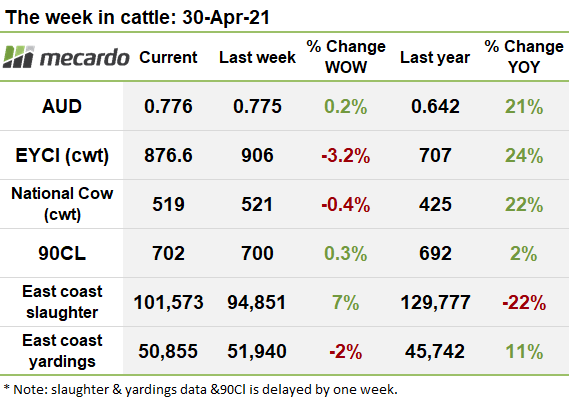 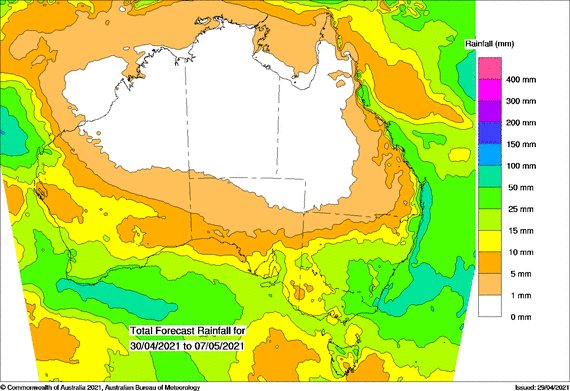