What have Guns ‘n’ Roses got to do with a delayed harvest?

November rain is a drawn out ballad by Guns ‘n’ Roses, and November rain is drawing out harvest this year. A tenuous link, and while it’s not cold November Rain, as least in NSW, it is seeing plenty of grain which would normally have hit the silos by now still standing in the paddock, and the impacts are showing in prices.

It has been a very wet November across most of the east coast. Figure 1 shows the rainfall anomalies from the mean, with large parts of the winter cropping areas receiving over 25mm more rain that the monthly average, in the first three weeks.  There is more forecast, with the coming 4 days expected to deliver another 25-100mm to most of NSW and northern Victoria.

Harvest delays are showing up in bulk handler receivals.  While things were a little better last week, Graincorp winter crop receivals for harvest 2021-22 have totaled 3.92mmt to Monday, which is less than half what had been stored at this time last year (figure 2).

Many grain producers will remember the wet harvest of 2010-11, which was also a big crop, but delayed getting in the bin.  We don’t have receival data for the first six week of harvest 2010-11 but figure 2 shows that it too until the last week and December, and early January for harvest to really get going.

There wasn’t a huge impact on total yields in 2010-11, but the wheeling out of falling number testing machines at site saw plenty of shot and sprung grain go into feed segregations.  From 2009-2012 the Australian Bureau of Statistics (ABS) reported wheat stocks, split into milling and feed grades.

Feed wheat hasn’t changed in price, but it is suddenly very cheap. Local SFW1 Basis to SRW Futures is now negative $130/t at Newcastle which is lower than even in 2010-11.  There is plenty of demand for feed in world markets, the problem is getting big quantities out.

In 2010-11 figure 3 shows that plenty of feed was carried into the next harvest, and with current shipping issues we could see that again, which will continue to depress basis.  The good news is, feed wheat is still priced well historically, unlike in 2010-11 when it was under $200/t. 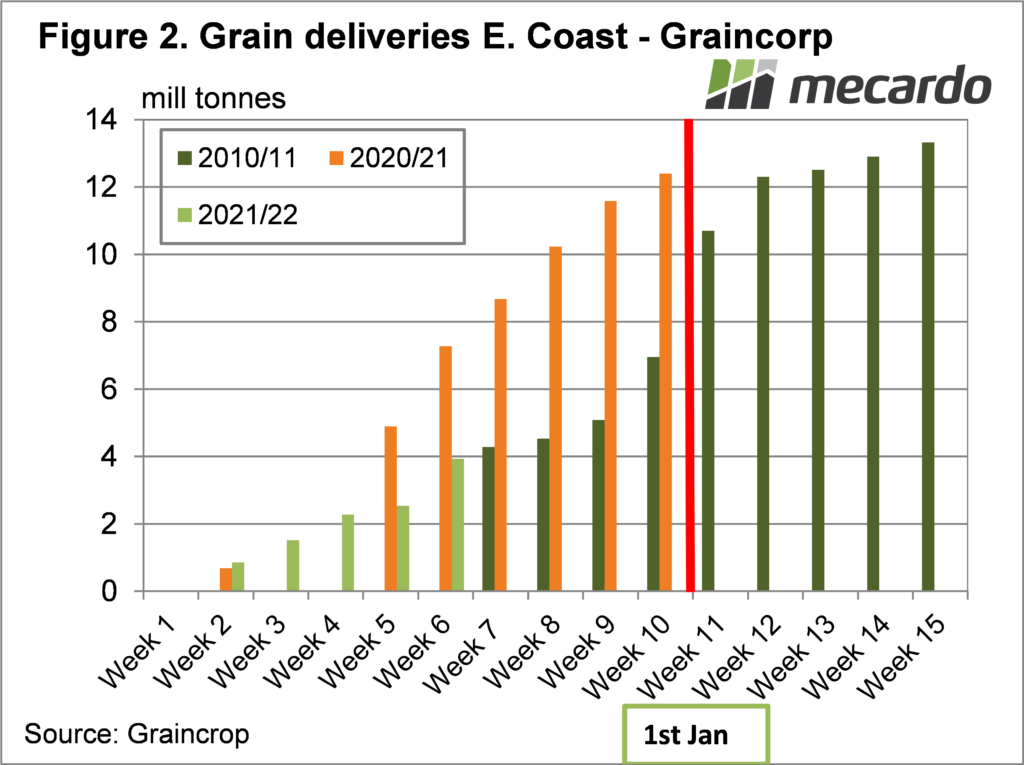