What lamb prices should we put in the budget?

As we head towards the end of the financial year, budgets are being constructed for 2020-21. We’ve had a few queries lately on what levels prices will be at for the coming year. Unfortunately for sheep producers, it looks like the stellar run of higher highs and higher lows might be coming to an end.

While 2020 might still end up being the highest priced year on record for lambs and sheep, it looks like it will be difficult for prices to maintain higher levels as we move through the spring and into 2021.

There is plenty of evidence to say that lamb and sheep supply will be lower over the coming year, especially sheep in the spring.  This should keep prices relatively well supported, but it is demand where the concerns come from.

Over the last eight years of rising prices (Figure 1) supply has played its part, especially in the extreme prices of the last two years, but it is underlying demand which has been responsible for the higher lows.  Demand is more difficult to measure than supply, especially over short time periods, but we’ll have a go.

We have used the last five weeks of slaughter and estimated price data to estimate demand since the COVID-19 outbreak, and the waning of panic buying demand boosts.  Figure 2 shows the demand curve we often refer to, with April 2020 added.  The price of 850¢ is higher than the average of 2019, but slaughter for the month has been at levels, when extrapolated out to a full year, 11.5% lower than 2019.

The slope of the curve, for how much price will fall as supply rises, or vice versa, is difficult to predict, but we can use the past two years as a guide.  Figure 2 shows that demand over the last month has been around 100¢ lower than the last two years, at the same slaughter level.

At the 21 million head slaughter forecast for 2020, lower demand would put the average price at around 700¢/kg cwt. The last few years saw lamb prices range 250¢ around the average, which puts the low at 575¢, and the high at 825¢/kg cwt, which fits reasonably well with prices coming 100¢ off last year’s levels.

There are plenty of ‘what ifs’ around lamb and sheep demand.  Re-opening of restaurants and food service domestically and in export markets will help this higher value end.  And with sheep supply very tight, lambs can only get so cheap relative to mutton.

Weakening retail demand, as stimulus wanes and the reality of lower incomes sets in, might offset some of the improvement at the high value end.  What we do know is that the stellar run of lamb prices will come to an end this year, and we might be waiting some time for a new price record. 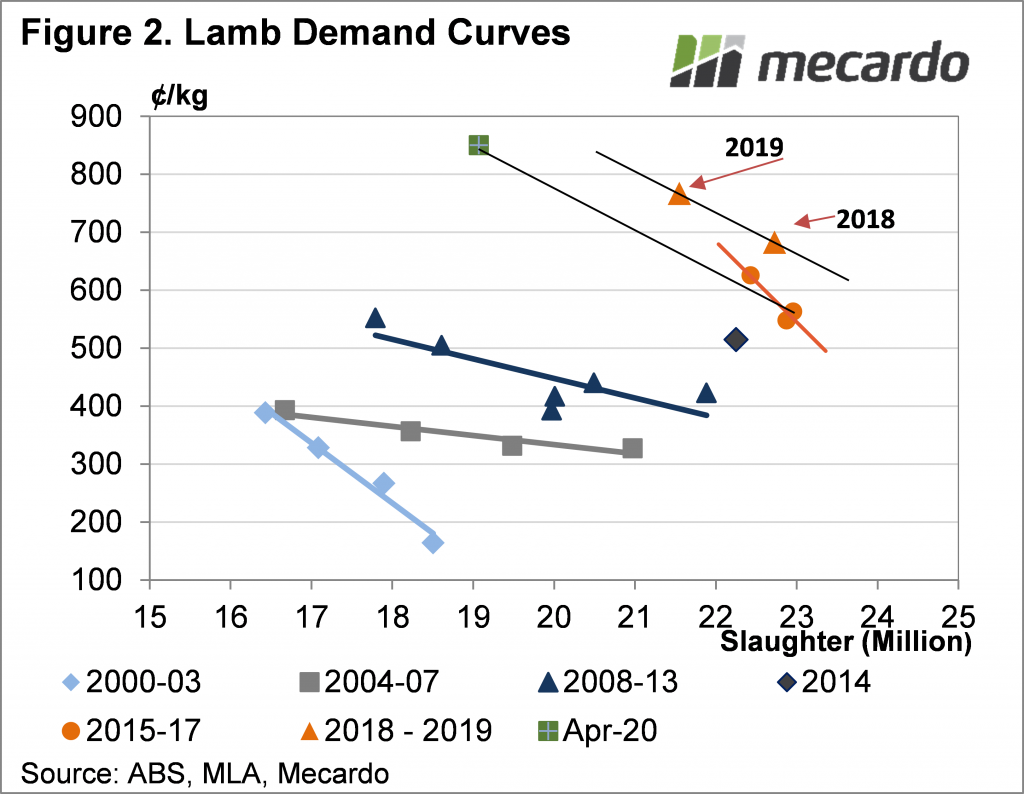