What’s a spring lamb going to be worth?

With plenty of lambs on the ground, and the peak winter/spring lambing season fast approaching and bankers wanting budgets for the new financial year, the question that is coming up is ‘how much are lambs going to be worth in the spring? Time for a little crystal ball gazing.

Educated guesses are as good as it gets when forecasting livestock pricing.  At least this year the uncertainty surrounding Covid-19 impacts on slaughter rates and demand have been ironed out.  At least we hope they have, but as the latest Victorian outbreak shows, nothing is certain.

To forecast a spring lamb price, we need to get a handle on where supply and demand might lie.  Demand is less prone to being moved around by the weather, so we can start there.

Long time readers will have seen figure 1 before.  It’s a demand curve, simply plotting annual lamb slaughter relative to price.  The fact that the points have been moving out and up suggests demand has been growing.  Historically we’ve seen periods of demand growth before the market settles and the higher supply again equates to lower prices.

Based on the forecast lamb slaughter of 20.8 million head, and demand similar to recent years, the Eastern States Trade Lamb Indicator (ESTLI) should average 782¢ this year.  This is down on the year to date average of 832¢, but this isn’t unusual given the stronger supply we should see in the second half of the year.

The second half of the year is traditionally priced lower than the first.  Figure 2 shows the five-year average weekly price declines from the end of July, reaching a bottom in December.  We can also see in figure 2 however, that even in the last two years there has been plenty of variation in the trend due to weather and supply fluctuations.

Figure 3 shows the trajectory of the ESTLI if it follows the five-year average trend.  Spring lambs will start coming late in winter, pushing prices lower, but the big flush usually hits in October.

Early new season lambs should manage to make close to 800¢, but later in the spring budgets should be done on the 700-750¢ price range.  A good spring, which slows supply of finished lambs would see prices remain stronger later, but with a heavier decline when they hit the market.

The range around the forecast should cover most scenarios.  Lower prices are in store, but if we look at figure 2 prices are likely to be well ahead of the five-year average, and still very profitable. 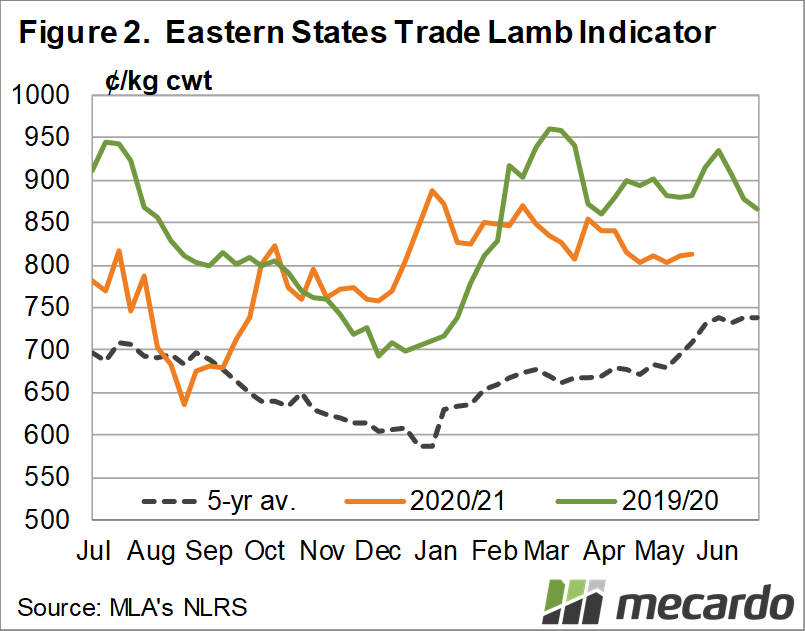 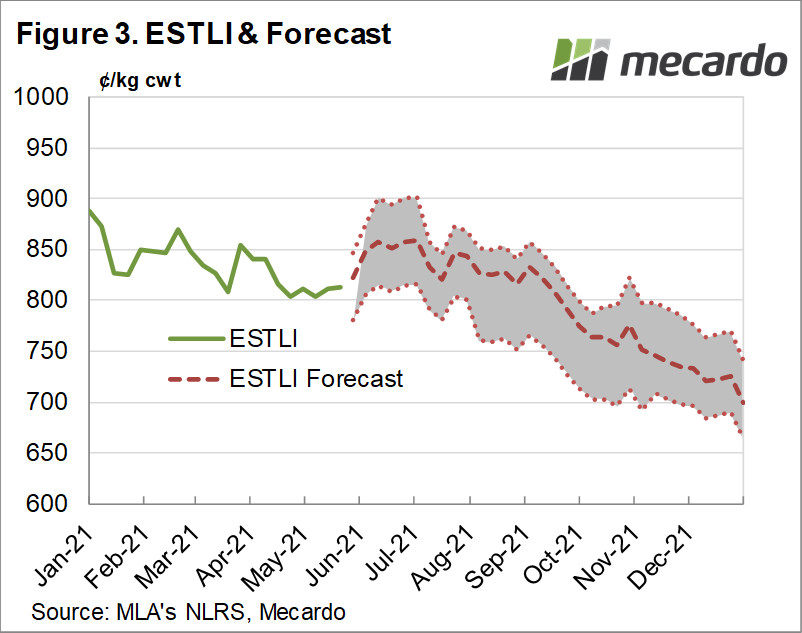