Wheat and barley has found some demand

Rising international prices are being reflected in the local market. With harvest over we haven’t seen basis improve, but even the poor cousin barley has found some strength. Barley has hit an 8 month high, while wheat has also found a new high.

Mecardo’s weekly market commentaries have been following the impact of the Russian export tariffs on international wheat markets.  In the last few days we’ve seen wheat fall, under some fundamental pressure, and then rise on the back of demand for Corn.

In our terms Chicago Soft Red Wheat has nearly gained $40 from its low and sits at a three month high.  While local values have responded, it is largely due to export demand.  Figure 1 shows the ASX discount has remained in the -$15 to -$20 realm over the last month.  Aussie wheat remains cheap, and is being moved offshore.

The good news for growers this year is that prices are historically good.  In fact, wheat prices are only 20% below the same time last year, when there was around a half as much produced.  If you offered a grower 2t at $360 or 4t at $300 you know which one they’d take.

And growers appear to be taking the money, at least for a good portion of the crop.  The weak basis tells us there is plenty of selling, as you’d expect with bumper crops and prices with a 3 in the front.

Even barley has found some demand since Christmas. The unwanted cousin since China imposed a tariff, feed barely had to fall to a significant discount to wheat to price into local feed markets.  Rising international prices, and feed demand, as led to a small recovery for barley

Figure 2 shows BAR1 has hit $250/t in Geelong this week, the highest price since Chinese imposed tariffs were introduced.  A 11% rally since December might encourage some selling from producers, and $250 is around the average for barley over the last five years.   Average price with a big crop and the biggest buyer on the sidelines is not a bad result.

The weak local wheat basis means that prices are unlikely to fall without international values easing first.  This is good news for those holding wheat, and opens opportunities like selling Dec-21 futures and holding this year’s physical, looking for a basis rally.

Barley might have a little downside.  Much of the recent strength seems to be to do with filling ships for export, however, these are going to keep coming, so any falls in prices should be limited. 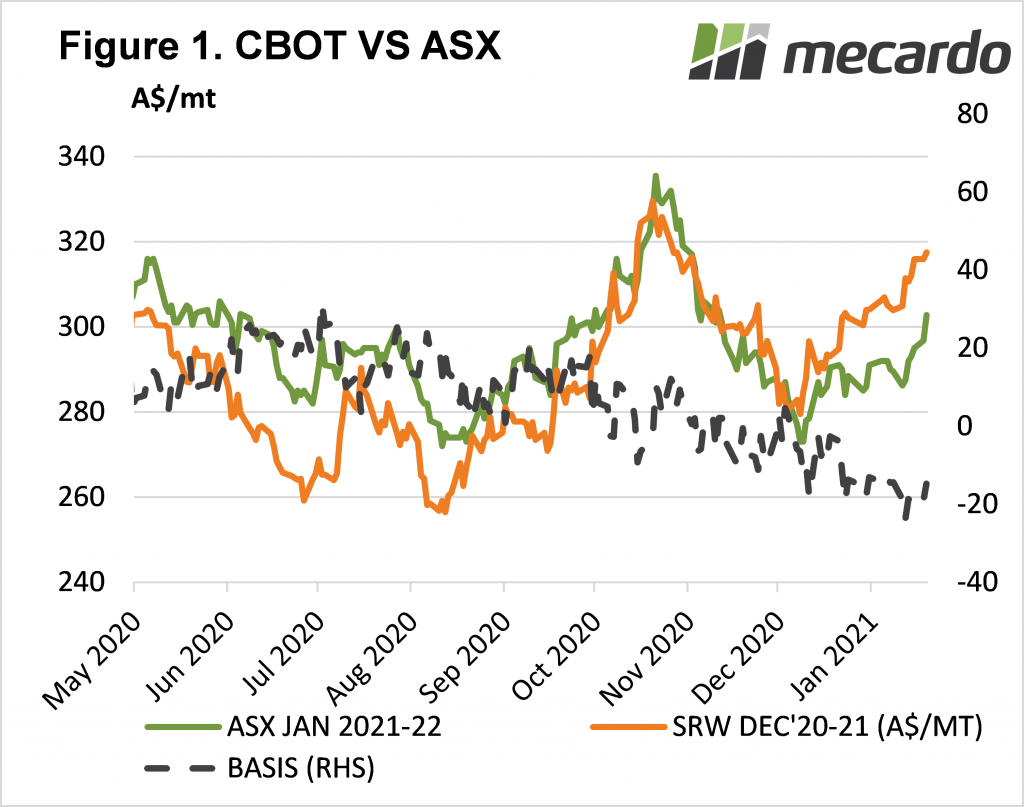