Wheat basis not falling but not rising

There is plenty of volatility in international grain markets at the moment, but this is not unusual when prices are at historically high levels. Locally markets have been remarkably steady, at least in recent weeks, compared to what’s happening internationally, as both growers and the trade get comfortable with the size of the crop.

Despite wheat having the most comfortable outlook of the big three grain and oilseed commodities, it remains beholded to corn and soybean movements, with a few little fluctuations of its own.

The latest rally in Chicago Soft Red Wheat (SRW), which lifted the December contract back to 756¢/bu was on the back of a few positive stories.  Russian export taxes, and heat and drought impacts on the US spring crop, combined with improving demand to see Dec SRW gain 5% over the last fortnight.

December SRW is now just 30¢ shy of the 9 year highs set back in May as shown in figure 1.  It was this time last year that wheat started to break higher, and in US terms spot SRW is 32% higher than the same time last year.

Currency hasn’t helped prices in our terms, with the Aussie dollar nearly 6% higher than this time last year.  However, it’s unlikely too many producers are complaining about SRW futures at $370/t.

The recent volatility has seen SRW range from a high of $388/t back in May, to a low of $342 in mid September.  Hindsight is always good, and consumers should have bought at this point, as SRW has rallied back to $370/t in the last five weeks.

Figure 2 shows local prices, as indicated by ASX Jan-22 wheat futures, have been much less volatile.  The May peak on the ASX was $356/t, while the September low was $330.  The latest rally in prices been much more benign, gaining just $16 to $346 last week. The CBOT SRW range over the last six months has been $46/t, the ASX has been $26.

ASX Jan-22 basis currently sits -$27/t as growers are no doubt happy to keep selling wheat at levels which are $30-50 higher than last harvest, and at historically high levels.  It is also rare to get a big crop, like the one forecast, and have prices in the mid-$300/t, so it’s little wonder basis is weak.

We often say basis is the clearest indicator of good buying and selling.  ASX basis has ranged from -$40 per ton to -$10.  Historically negative $10 isn’t good basis, but on the back of two extremely strong crops, this year it might be the peak.

Growers holding Dec SRW futures or swaps should be looking at switching into physicals when basis narrows, especially if wheat is going to be cashed at harvest.  Consumers can probably hold out for harvest pressure now, which might offer some basis trading opportunities as wheat hits the market. 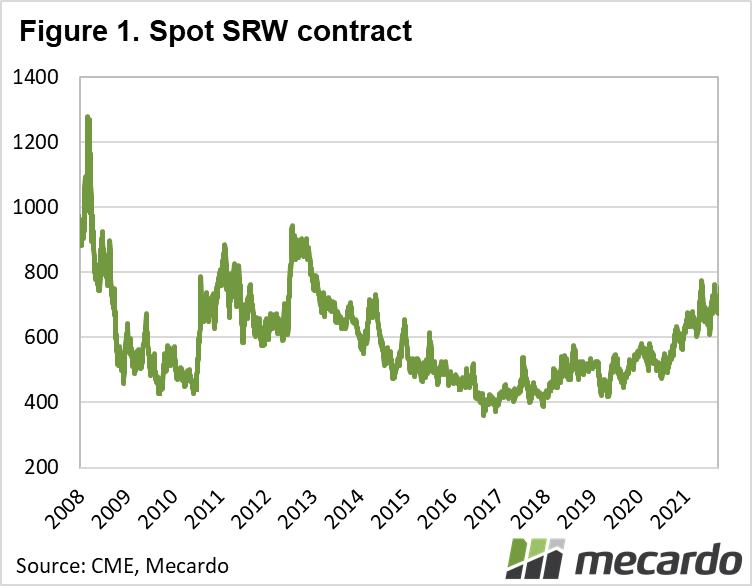