The outbreak of war between Ukraine and Russia has effectively cut off the majority of grain exports from the entire black sea region. The logistical constraints may not last forever, but concerns abound that Ukrainian harvesting and planting may be disrupted, creating a multiple-year issue for already tight wheat markets.

As we have pointed out in previous articles, Ukraine and Russia combined are responsible for a massive 29% of the global wheat export trade. Removing this huge volume of wheat supply will have significant consequences for prices. Wheat markets are already incredibly tight from a historical perspective, with the stocks to use ratio of major global exporting countries at an all-time low (figure 1).

On the outbreak of full-scale war, the market reaction was immediate, CBOT SRW wheat prices rocketed up to $US340/Mt ($460 AUD).

Some technical selling drove the price down sharply the next day, as profits were taken, and stop losses were triggered, creating a 9% downward chain reaction to $US 310/Mt ($428 AUD). However, this dip did not last long, with prices rebounding back to $US330/mt ($454 AUD) this week as the markets reassessed.

The sharp uplift in international wheat prices has not, however, flowed through to Australian markets. Cash bids for Geelong wheat have barely budged $6 (<2%) since the start of the month.

The result has been that basis to CBOT prices has blown out to $86 AUD, up $52 (155%) from month ago levels. The reason for this is, quite simply, because Australia’s shipping stem is currently operating at capacity, there is no ability to increase grain exports in the short term, and most wheat booked for export has already been contracted.

Concern exists that Black Sea wheat supply may be constrained beyond the short term, particularly if the war between Russia and Ukraine becomes protracted. With fuel supplies diverted to military uses, and agricultural supply chains blocked in many instances, Ukrainian winter crop harvest, which is normally in July and subsequent planting in August, may be significantly disrupted. Growers are also usually preparing for planting of the spring crop now. Many able-bodied Ukrainian farmers between 18 and 60, may also be called into military service to defend Ukraine, creating labour shortages across the agricultural sector, exacerbated by citizens fleeing the country.

China has indicated that it will purchase Russian wheat, possibly resulting in the supply of its traditional vendors being diverted to new destinations formerly serviced by Russia. This will not solve the problem of any prolonged shortfall in Ukrainian production though.

The international CBOT futures curve suggests that the market expects the effect of the war to potentially extend into 2023, with prices lifting 10%-15% for delivery dates between now and March 2023 (Figure 3).

On the Australian front, while we haven’t seen more than a 6% lift in forward prices so far, opportunities to sell forward at premium prices may emerge as the longer term implications of the war become clearer (Figure 4).

With Ukraine and Russian wheat effectively blocked from the global wheat supply chain for the foreseeable future, the unavailability of ~30% of global trade flows will exacerbate an already tight world marketplace. While Australia is not experiencing much of the price uplift currently in the spot market, as the expected duration of the war, and impact on Black Sea production & trade becomes clearer, opportunities for higher prices may emerge in the future. 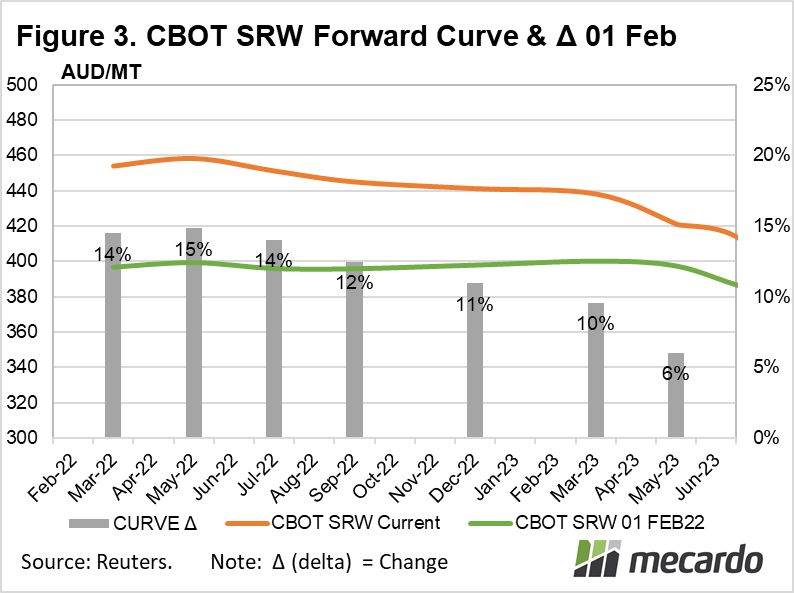