It hasn’t taken long for global wheat supplies to go from comfortable to tight, with the United States Department of Agriculture (USDA) slashing production and stocks estimates last week. This has given international and local prices a boost, but Australian relative values are at new lows.

The main changes in the World Agricultural Supply and Demand (WASDE) report were outlined in the Friday commentary (view here) with the USDA drastically pulling back production estimates for some major wheat players.

The impact of lower wheat production, and still very strong consumption is shown in figure 1.  Ending stocks of wheat are forecast to hit a five-year low, with the stocks to use ratio at a six-year low.

While corn and oilseed production and stocks were declining, wheat was holding up reasonably well, thanks largely to the fact it’s a winter crop in the US.  The spring cropping areas are now being hit, and this has supply forecasts reacting like we saw with the row crops earlier in the year.

The market’s reaction to the cuts in supply was typical, and probably stronger due to the fact no one saw it coming.  Figure 2 shows the latest rally has taken the December 21 Soft Red Wheat (SRW) contract above $380/t in our terms.

In US terms, the SRW market is at a fresh eight-year high as the trade starts to worry about whether this will be enough to lift wheat production, with such good money available for oilseeds.

For Australian croppers, the wheat supply weakness has been positive, but we could see further upside.  Figure 2 shows ASX Jan-22 wheat futures have rallied, but only back to $345/t.  This is a new high, but it is well behind SRW.

Figure 3 shows ASX Jan-22 basis, or spread, at a very low $35.  Only five weeks ago ASX was at a $14 discount to SRW, and while international freight rates have been on the rise, it’s likely not enough to warrant such a heavy discount.

The likely driver in the low local wheat basis is the good potential crop here, and rising prices encouraging forward physical selling, which is keeping a lid on price rise.

As harvest draws closer, local prices will likely move close to SRW values, which means there is little value in pricing grain forward in the current market.

Australia now has some of the cheapest grain in the world, which is likely of little consolation to consumers facing rising costs.  There is the opportunity to just buy the basis, by pricing physical and selling SRW, which would pay off if international prices fall and local prices hold. 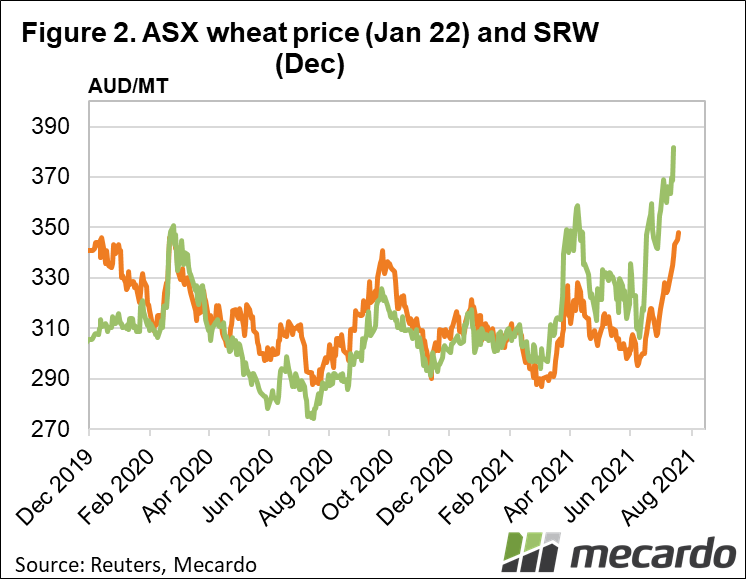