As I’ve said before, a week in wheat can be a long time, and this week is no exception. In the space of seven short days, Russia invaded Ukraine, the world united against Putin’s tactics with a barrage of unprecedented economic sanctions, the wheat market rallied, fell and then rallied some more, coal/fuel/energy prices have soared, over 1M people are dis-placed and we still have more questions than answers.

What is becoming clear is that we are undergoing some kind of seismic shift in commodity trade flows.  Currently the Black Sea is closed to shipping.  This means that access to arguably the most important trade route for wheat is blocked.  While export pace from both Russian and Ukrainian ports had been good, the disruption of shipping means that upwards of 25mmt of wheat is without a home.

CBOT prices have rallied hard, as much as AU$94/t for the May ’22 contract.  Dec ’22 has only rallied AU$19/t.  The market has gone from a relatively neutral pricing position to now being in a strong inverse.  It is sending the signal that the trade want wheat today, not next week, and certainly not next month.  There is effectively a 200¢/bu inverse between the May contract versus the Dec ’22. (figure 1)

The net result of this is a shift from Black Sea origins to the US, meaning that the US (the usual residual supplier of wheat to the world) will likely see excess demand and shrinking supplies.  All of the world’s surplus stocks will be held in the Black Sea and China, precisely where the world doesn’t want them.

Despite all of the economic sanctions, Russian trade flows of natural gas and wheat will still likely flow, albeit at a much slower pace.  Instead of trading in US dollars, countries like India, Pakistan and China will trade in their own currencies.  China consumes 40-50mmt of wheat annually – mainly as feed.  If they buy Russia wheat exclusively at the expense of all other origins, it will make leave a big gap to fill.

Having said this, China had been buying almost exclusively Ukrainian corn, leaving US sales sadly lagging.  However, the rapid escalation of war in Ukraine has seen China quickly snap up US corn and beans as sanctions and logistics bite supplies out of the Black Sea.  This is behind the recent strength in corn and soybean futures we are seeing despite improving weather in South America (remember that was the top story not so long ago!).

The other issue the market is grappling with, is the impending spring sowing campaign in Ukraine.  If Russian forces remain in Ukraine for another 3-4 weeks, the likelihood of the spring sown crops getting sown on time is under threat.  Of greatest interest will be the amount of corn and sunflower that gets in the ground.  Of wheat production, over 95% is winter wheat which is already in the ground.  However, Ukraine traditionally exports 17% of the world’s corn and 50% of the world’s edible sunflower seed/oil.  Assuming they can be sown, field operations are likely to be hampered by a lack of diesel and crop inputs, making global supply a multiyear issue.

Last night, peace talks between the two parties didn’t reach an equitable settlement, although there was some access granted on humanitarian and aid corridors.  The wheat market will trade these peace talks and military action while there are Russian boots on the ground.  Unfortunately, it doesn’t look like we are in for any quick resolution. 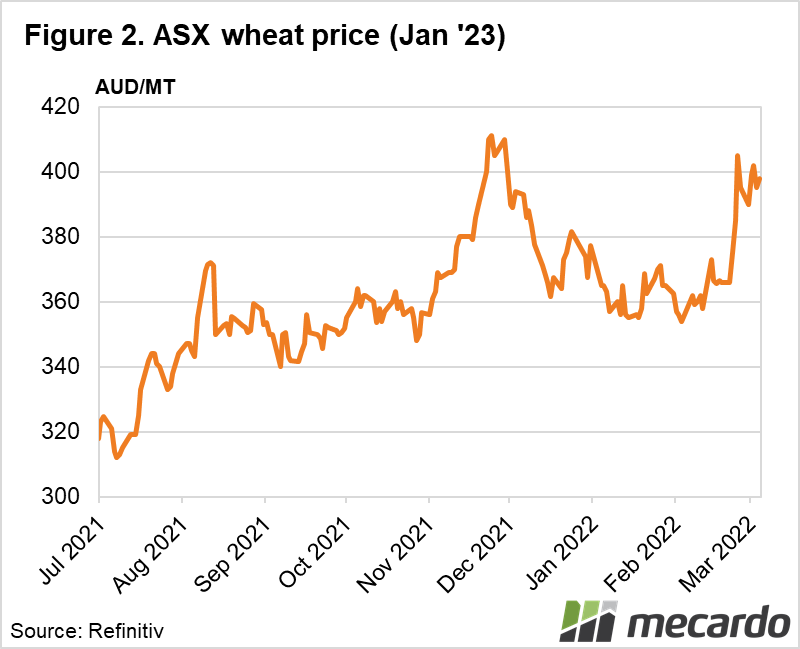