Wheat – the week that was

The global wheat market has come under pressure in the past week. We saw a big sell off last week as the funds tried to rebalance their long/bought positions to a more neutral stance. The cat-alyst for this was thought to be the steep decline in Aussie cash values. These in my mind are separate issues, driven by separate factors, but the fact highlighted the discrepancy between US prices and the rest of the world.

The slight loosening of the global balance sheet courtesy of increasing Aussie and Argentine wheat stocks also helped to build a more bearish theme.  However, there remains plenty of support in the short term.  Given the tight nature of global inventories, the weather in the Northern Hemisphere is already adding support, despite there being little to no correlation between winter weather and final yields.

That being said, the wheat market is already pricking up its ears over a dry US Plains – the same area that experienced drought last year –  and a cold snap expected to move into central Russia and the Black Sea region.  There is currently poor snow cover over much of the south and central regions, meaning the risk is high for some winter kill.  However, the cold snap is expected to be preceded by some precipitation adding some much needed snow cover.

The other area gaining some attention in southern Brazil and northern Argentina.  The key Brazil production areas of Parana and Matto Grosso du Sol are experiencing some rainfall deficiencies.  While it is not critical right now, the record production previously tipped for Brazil is under threat.  This area suffered badly last year as their safrinha (second) crop was hit by drought.  This is only half the story as the second corn crop was planted late, meaning it ran head long into the dry season, missing the all important establishing rains.  Given the ‘on-time’ nature of this current years crop, the second crop should not experience the same issues.

It is hard to argue for too much more downside in global values as we are still to see a fair bit of consumptive demand emerge.  Food security will likely remain a key issue as the Northern Hemisphere heads into winter and the new Omicron COVID variant flares up.

It is a fascinating new world we live in.  A changing climate, government intervention, geo-political tensions and a pandemic.  What a time to be alive.  I suspect the wheat market will now plateau as we move into the festive season but possibly ramp up again in the new year.

Look for the wider markets to move to a ‘risk off’ attitude as we head into the holiday period.  Whatever happens in the short term, there is plenty of volatility to play out into the New Year.

● Dry weather a concern for US plains, forecast cold snap for the Black Sea region a worry in Russia as early snow cover is poor.

● Food security will likely be a key factor into 2022, with uncertainties around new Covid variant, expect plenty of volatility in the market still. 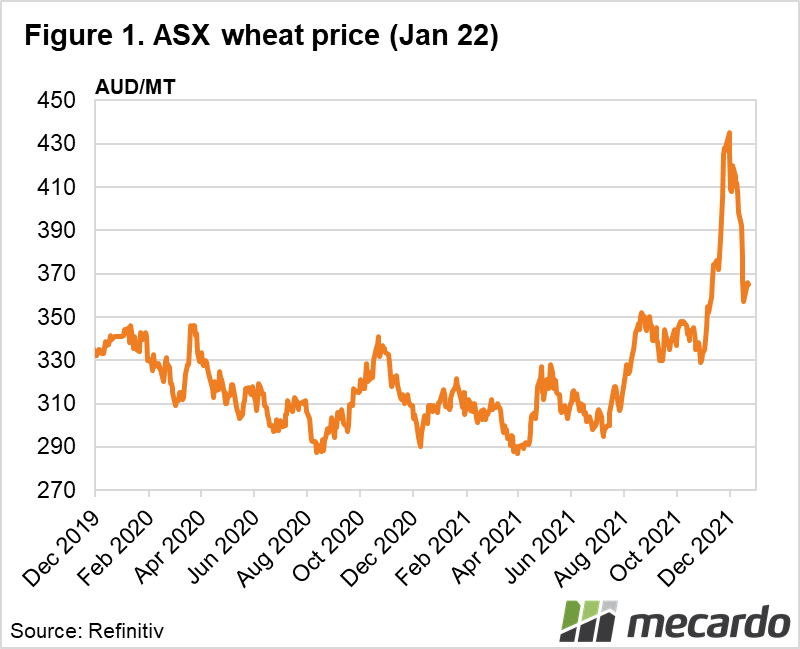