Which lamb export markets are struggling?

Regular readers will have seen that part of the blame for falling lamb prices in general, and heavy lambs, in particular, has been laid on export markets. Last week we received a query as to which export markets are letting the job down, and as timing would have it the June volume data has just been released.

June lamb slaughter should have been at similar levels to May, so the weak export numbers in May might have been due to strong domestic demand at the Supermarket level. In June we might have seen somewhat of a return to a more usual export/domestic spread.

Lamb exports to China were up 10% on May, and 5.5% on June last year. The US market took 31% more lamb than in May, and 17% more than the same month in 2019. When total exports are similar to last year, and our two biggest markets are higher, the volume has to come from somewhere. The Middle East was the loser, with lamb exports down 18% on May and 27% on June 2019.

With lamb export volumes strong in June, any decrease in demand should be reflected in prices.  Export values are only reported to April, but we can see how the shift in volumes from the Middle East to China might be impacting prices for exporters.

Figure 2 shows lamb export values in cents per kilo to our three major markets. The Middle Eastern market was paying record prices for lamb earlier in the year, while Chinese values had subsided.  A decrease in volumes to high-value markets, moving to lower value markets means less money for exporters.

Lamb export values to the US were still very strong in April, but things may have subsided since.  Since the COVID-19 crisis started there has been talk around higher value lamb cuts suffering from lower prices, and some price data from the US confirms this. Figure 3 shows the price of Fresh Lamb Racks sent to the US and Frozen Boneless Legs.

It would seem that weakening demand from the Middle East, and for high-value lamb cuts in general is behind the falling lamb values. Lower prices for lamb racks in the US since earlier in the year has contributed to a $10-15 per head fall in the value of a lamb to a processor. Domestic foodservice closures have exacerbated the issue for high-value cuts.

Lower export prices have seen a squeeze on processor margins, which in turn has led to cutting kills.  Now, with a bit of a late flush of old season lambs, there isn’t space to process them and prices have fallen. Whether they have fallen enough to improve margins for processors, to an extent they will add shifts remains to be seen. 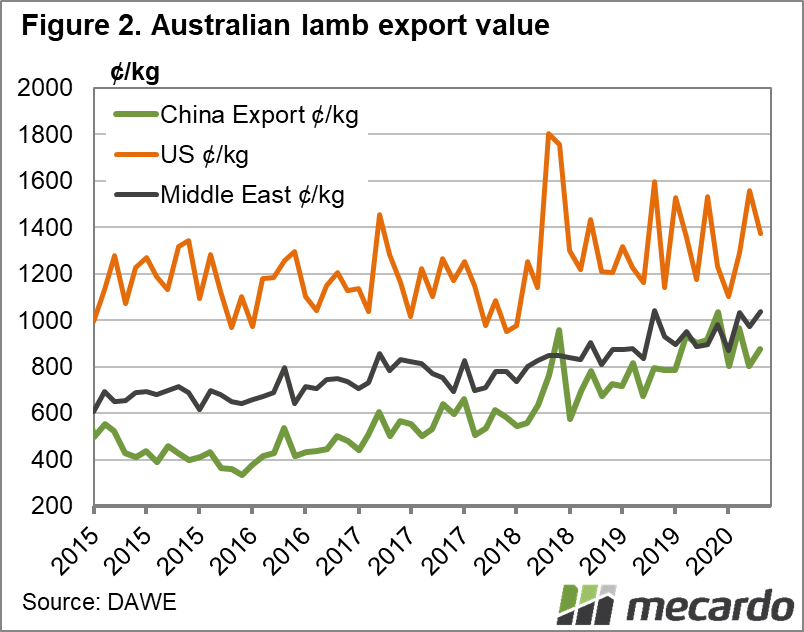 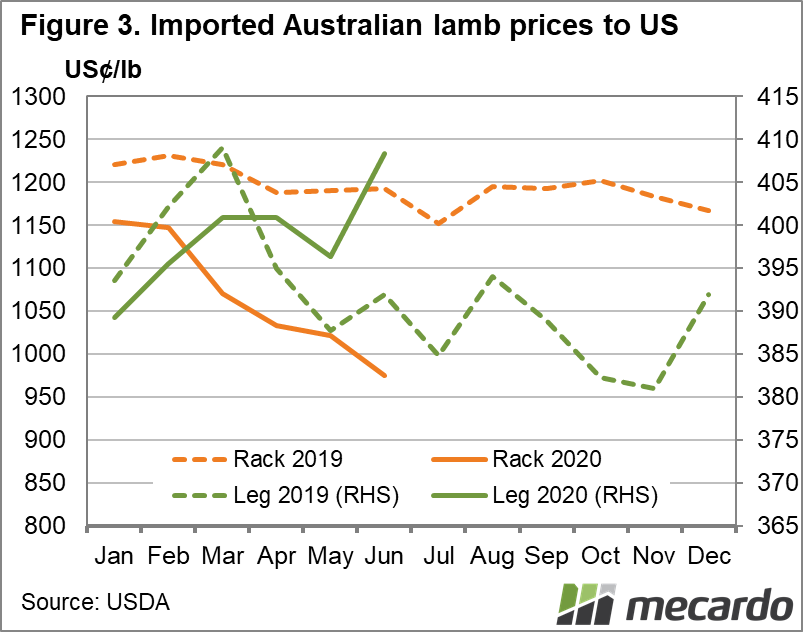