Wool has a little run

Last week the reduced offering was noted as a contributor to the turnaround in the wool market, however this week a 5.3% EMI rise was observed despite an increased offering. Fremantle joined the better demand and finished strongly; a good pointer to next week’s prospects.

The Eastern Market Indicator (EMI) rose another 47¢ to close this week at 937¢, taking the 2-week improvement to 79 cents or a healthy 9.2% lift on the season low to date of two weeks ago. The AUD was stronger by almost US$0.01 to US$0.732 which saw the EMI in USD terms rise 43¢ higher, closing at 686¢. Fremantle found solid demand this week also with the Western Market Indicator rising 62¢ and now sitting at 984¢.

This week on Mecardo, Andrew Woods referenced the Combing/Carding basis looking for indications for the wool market going forward. While the relationship has worked well for four decades, this is the first pandemic driven down cycle, so we need to be careful in extrapolating from past market patterns. Given that caveat the carding combing basis is close to a level which would indicator combing merino prices are at a cyclical low.

The improvement was felt by all types and across the three selling centres, with AWEX reporting that “the larger offering attracted widespread competition from the opening hammer”.

The individual Merino price guides rose by 30 to 117 cents, and in a strong pointer to renewed interest Fremantle selling later than the East Coast closed higher for the 19 to 21 MPG’s than Melbourne & Sydney.

The crossbred section recorded strong rises also, increases up to 55 cents with 28 & finer the most effected.

Cardings in all centres were also on the up with an average of 30 cents lift noted in line with the general market.

Next week the offering reduces, with 25,030 bales listed, with Melbourne & Sydney selling over two days; Fremantle only offering on Wednesday.

After this week’s market performance, the wool market dares to hope that we may see a third consecutive week of rising prices. 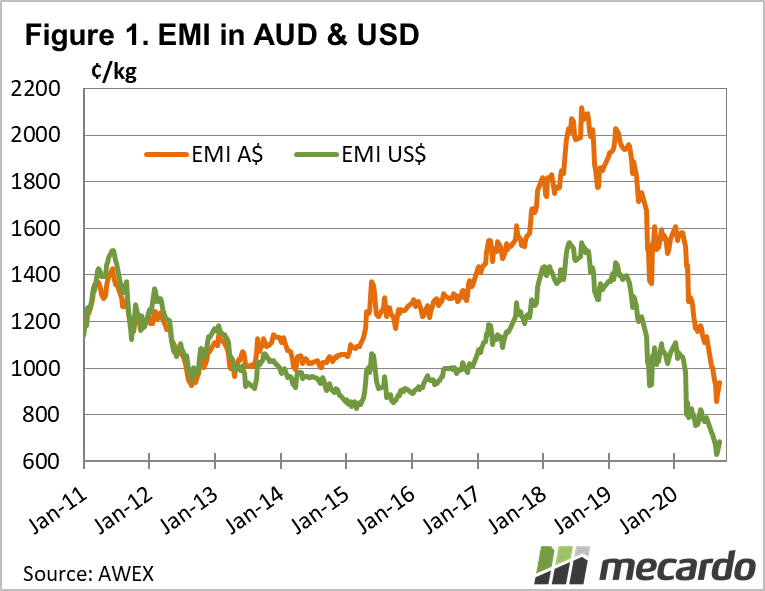