Good news this week coming from the wool market as the sharp declines of the opening two weeks after the winter recess were halted. The smaller selection attracted buyer support from the outset although sellers were still unwilling to fully embrace the market resulting in a large pre-sale withdrawal, a high pass-in rate and a smaller than normal clearance.

There were no sales in Fremantle so the Western Market Indicator (WMI) remained at 1351ȼ.

The price increases were felt across all merino MPG’s, however, it was the fine end that showed the greatest improvement. 17 MPG in Melbourne was up by 89 cents, while the 21 MPG showed a more subdued lift of 20 cents.

The crossbred indicators were largely unchanged to “in sellers’ favour”, with AWEX reporting that 26 to 30 MPG traded within 7 cents of last week’s levels.

Cardings fell 1ȼ in Melbourne, and 7ȼ in Sydney across the week.

This week on Mecardo, Andrew Woods takes a shot at explaining the 30 MPG price and where it may head in the future (view article here). A good explanation of the strong performance of crossbred wool prices in the 2011-2019 period would help assess where the market is likely to go from current levels. Based on the price ratio to non-wool staple fibres and the US dollar price there does not look to be any downside for the 30 micron, with the question then becoming how long until some upside?

Next week an offering of 40,554 bales are rostered, with Fremantle joining Melbourne & Sydney selling on Tuesday & Wednesday only.

While it is not expected that this offering will all make it to sale, the lift in supply will test this market. 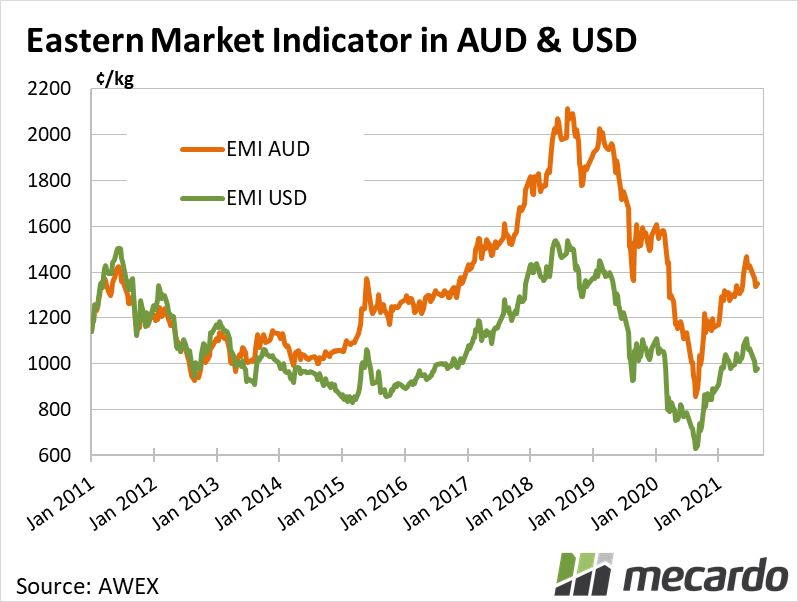