Wool market on a roll

The wool market has followed up from last weeks strong finish to post solid price increases across all sectors this week. The Australian Wool Exchange (AWEX) reported ‘spirited bidding’ from the opening lot, which helped to push prices up as the sales progressed.

The Eastern Market Indicator (EMI) improved for the third week in a row, by 42ȼ this week to close at 1,449ȼ. The last time the EMI was higher was in June 2021 when it was quoted at 1468ȼ.  The Australian dollar lifted on the previous week by 0.5 cents, with the AUD quoted at US$0.7124. This resulted in the EMI in US dollar terms increasing by 37 cents to settle at 1032ȼ.

Again, the Western Market Indicator followed the east coast lead rising 37ȼ to finish the week at 1492ȼ. The last time the WMI was higher was in April 2020 when it was at 1512ȼ.

As mentioned earlier, there were solid price increases across all categories this week. In Melbourne, the 17 MPG lifted by 69ȼ while in Sydney the index rose by 98ȼ. For the 19 MPG and broader categories increases were ranging from 15ȼ to 50ȼ.

On Mecardo this week (view article here), Andrew Woods looked at the 17MPG from the perspective of Chinese and European buyers of Australian wool.  It pays to keep this perspective in mind, as Andrew points out, as in some strong price cycles, exchange rates can mask the actual demand signals in the market.

Next week a large offering of 48,274 bales are listed with all centres selling resuming sales on Tuesday & Wednesday. 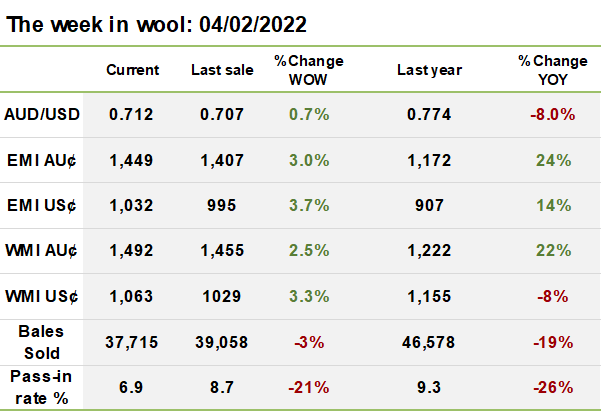 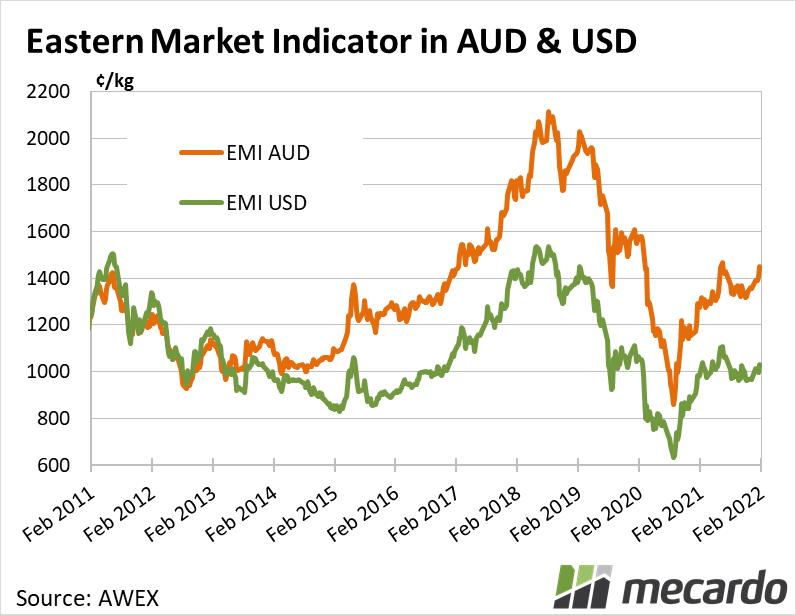