It was green across the board again for all MPG’s and indicators, bar the 20 MPG in Melbourne which only slipped 1¢. The second last sale of the season saw big lifts again across the market. AWEX reported that the “strongest buyer sentiment occurred on the first selling day”, pushing up all categories, whilst on Wednesday, despite strong demand, bidding was “more subdued”.

There were no sales in Fremantle this week, but they will be back on deck next week.

With Fremantle not selling, there were just 33,330 bales offered for the week. With a pass in rate of 5.1%, 31,635 bales were sold for the week, which was nearly 9000 bales fewer than last week. This was the lowest national offering since October last year according to AWEX.

The finer end of the clip outperformed the rest of the categories with 19 MPG and below rising between 10 & 84¢ for the week. Stand out lifts were the 16.5 MPG in both Melbourne & Sydney, rising 84 & 68¢ respectively.

Crossbreds also performed reasonably well, lifting between 9 & 33¢, the 26 MPG in Melbourne the stand-out for that category. Cardings rose 2¢ in Sydney & 5¢ in Melbourne.

This week on Mecardo , Andrew woods took another look at fine Merino and cashmere prices. Andrew notes that cashmere prices have been rising since mid-2020, but still have room to rise further, according to historical precedents. This is good news for Australian fine wool growers as the 16 micron fleece price has tended to trade between 10% to 20% of cashmere prices since the mid-1990s. Read Andrew’s article from April this year on the link between cashmere and wool here.

Sales are in Sydney, Melbourne & Fremantle on Tuesday & Wednesday. With a much larger offering on the cards next week, 44,406 bales, we should see another week of spirited bidding and possibly more rises across the board again, especially in the finer end of the market. 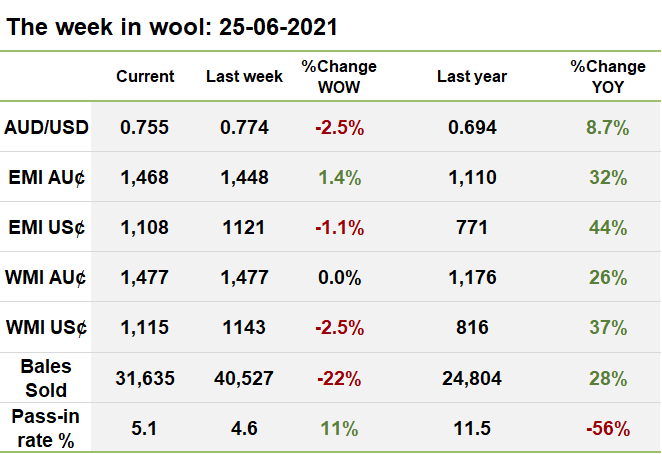 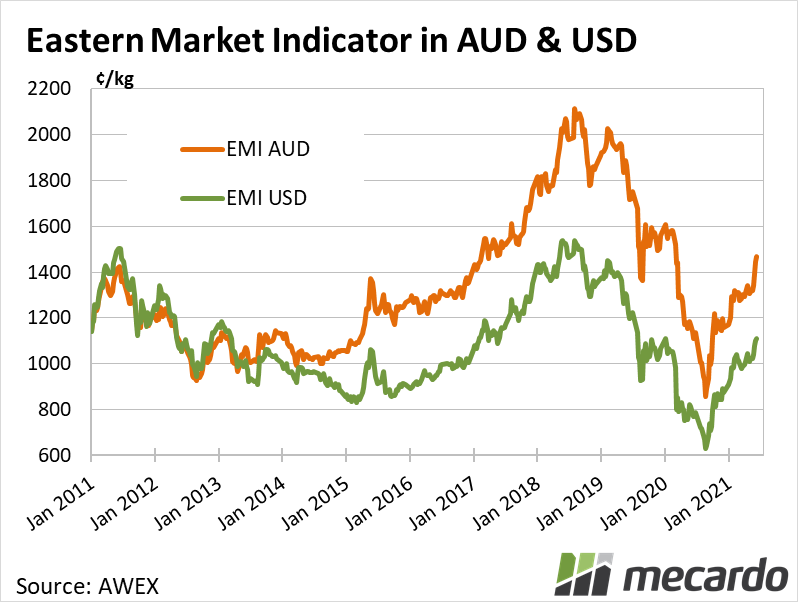