Wool prices are well reported with the Australian Wool Exchange (AWEX) providing great transparency for the greasy wool market, unlike our close cousins across the other side of the Tasman or the South American markets. Wool volumes are also reported weekly but they need more information to place them in context. This article takes a quick look at current greasy wool sales volumes.

The greasy wool market is made up of a number of smaller related wool markets so when thinking about wool prices and volumes in total, it is by necessity a broad brush approach which glosses over some significant differences in terms of supply and price. This article focuses on total volumes of clean wool sold (all categories and breeds, smoothed by three months) and uses the Eastern Market Indicator (EMI) in US dollar terms as the measure of price. The EMI is used in US dollar terms as we are interested in the possible effect of supply on the price the buy-side is willing to pay.

Figure 1 compares the year-on-year change in clean volumes of wool sold at auction in Australia (left-hand axis) with the EMI in US dollar terms (right-hand axis) from 2006 to April 2021. Notice that the volume has spent a lot of the time in negative territory as the size of the Australian clip has fallen.  There is no real correlation between the change in supply and price, as the EMI is following the lead of the general apparel fibre price cycles. Change in wool volumes tends to feed into changes in the relative price of wool to other apparel prices and between the different categories of wool.

For the current market however, Figure 1 does show the large increase in sales volumes compared to a year ago. The rolling three-month total of clean wool sold is nearly 50% up year-on-year. Part of this big increase is the base effect, namely that sale volumes were well down at this time last year as uncertainty about the pandemic was acute. To look over this, Figure 2 compares sales volumes to two years earlier, for example comparing volumes sold in the past three months to the same period in 2019. This reduces the increase, but it remains solidly 20% higher which helps explain why wool prices have steadied in recent months.

Solid rises in the order of 20% in sales volumes do not preclude high prices, as the 2011 period shows in Figure 2. However, in 2011 the cotton market ran rampant, rising to price levels not seen since the US Civil War some 150 years earlier.

There are more dollars flowing back to farmers from the wool market than a simple look at changes in the EMI would suggest. In the past couple of decades wool prices have picked up against other fibres by reducing micron and because of a shrinking supply – in essence a case of rising price on falling volumes. The current market looks to be stronger, with solid prices and rising volumes. 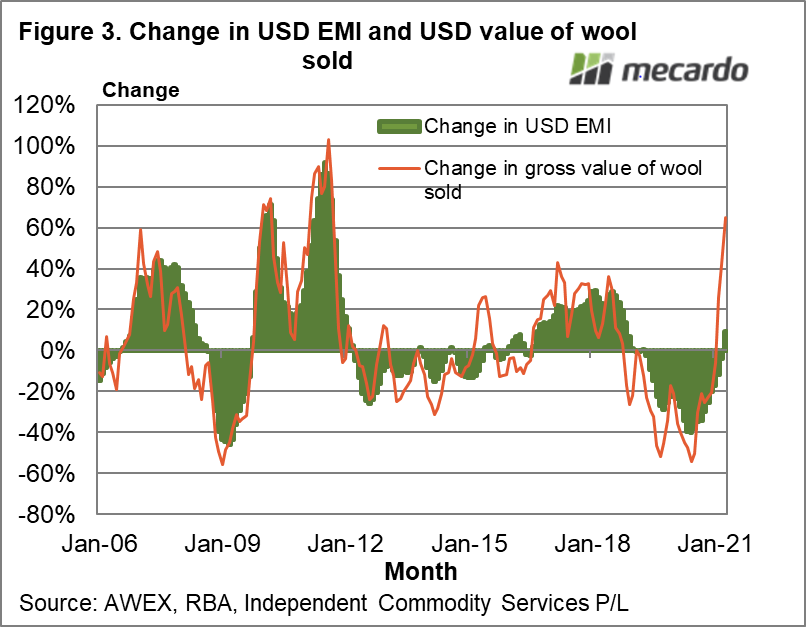