For the best part of two decades, the greasy wool section of the wool supply chain has not had to concern itself with significant stock levels, following the disaster of the 1990s. This situation is changing and it important for the industry to work out a balanced perspective of what the newly acquired stocks mean to prices in the coming years. This article is part of the process.

Think wool stocks for most wool growers and they are transported back to the 1990s and the aftermath of the collapse of the Reserve Price Scheme (RPS), where it was a positive day when stocks fell under 4 million bales. There were significant wool stockpiles after both World War 1 and World War 2. Figure 1 shows greasy wool stocks levels as a percentage of production from the late 1940s to last season. You can see the 1951 price peak came as stocks reached a low point as the World War 2 surplus was finally liquidated. Stocks rose and fell from the 1950s onwards, with a stock level below 5% the precursor of a strong rising price cycle. Mecardo briefly looked at deflated and detrended Merino prices and stock levels in late June (view here).

The early 1990s available stocks levels stand out in Figure 1, as they were on par with the late 1940s levels. Around 2010-2011 stocks fell to low levels again, as they did in 2018, although there are some definitional issues and a lack of official records associated with stock levels during the past two decades. As an example of a definitional issue, after the liquidation of the RPS stockpile in 2001 ABARES included estimates of farmer stocks not yet in brokers stores. If not supported by well-constructed surveys (which they were not) such numbers introduce uncertainty into stock estimates. The take-home message from Figure 1 is that stock levels vary through time.

Figure 2 takes a closer look at Australian stocks from the mid-1970s onwards. In this graphic supply (production plus carryover stocks) is compared to sales (production less carryover stocks). The idea is to compare supply to demand. The 1990s stand out as usual, as a time of excess supply. Demand had reached around 800 greasy kilo tonnes in the late 1980s. Demand fell by nearly half in the final throws of the collapse of the RPS before recovering back to around 800 greasy kilo tonnes per season (at a low price). Supply during this period was up to double of the structural demand of 800 kilo tonnes so no wonder price was crushed.

From the early 2000s onwards demand followed supply down to around 340 kilo tonnes (around 2 million farm bales), where it stabilised. Now, as the article on AWTA volumes showed last week, production has fallen to lower levels under the pressure of drought but with the addition of stocks, supply is holding around the 340 greasy kilo tonnes. Unlike the 1990s, supply with the newly built stocks remains in proportion with recent levels of pre-COVID-19 demand.

The temptation to use the 1990s as a guide as what to expect in the wool market confronted with increased grower held stocks should be resisted. At this point, the pandemic is still playing out and demand remains weak. There seems to be a reasonable chance that after the pandemic demand will return to levels of the past decade when 340 kilo tonnes of greasy wool (around two million bales) of Australian wool was absorbed by the supply chain each year. Such demand will absorb Australian farmer stocks as production is lower. 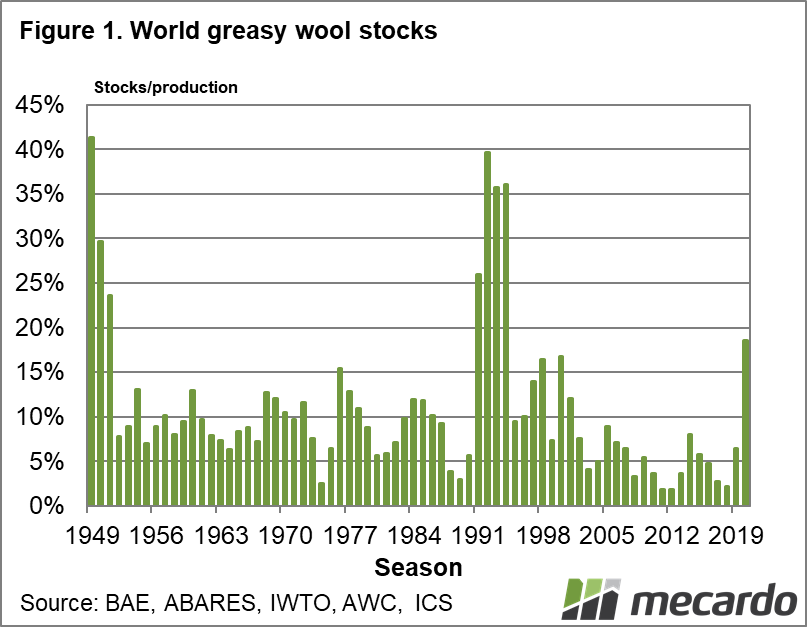