Young cattle prices have been supported by low slaughter numbers and declining yardings for a few weeks now, and this week was no exception. Processor and heavy steers prices saw encouraging gains, however, restocker and feeder prices slumped.

Yardings dropped again last week, down 17%, with the reduction led by QLD, which fell by 22%, followed by VIC booking a 27% tumble. Seasonally speaking, this is unusual, as yardings typically lift this time of year. A total of 39,318 head were yarded on the east coast for the week ending 19th February 2021, which was 7,994 less than the prior week.

The national categories showed some bright spots this week, with processor, medium and heavy steers all travelling upwards. Vealers reached another solid high, now edging quickly towards being $1 (25%) higher than the low set back in mid-December. In contrast, restockers and feeders downshifted against the trend.

The Aussie dollar was stagnant as a pond in a sheltered field, holding ground to remain at 0.787US.

The 90CL fell back another 13¢ (2%) last week, off the back of jitters in the US about transport reliability during extreme cold weather from the polar vortex effect that has had cattle ranchers in some states resort to desperate measures like bringing new calves into their own homes to protect them from the weather.

A considerably lighter sprinkling of rain is due for the coming week, with VIC and southern NSW looking to basically miss out, while further north, most areas are set for only 5-10mm. Like we said last week, yardings typically rise this time of year; but the downward trend recently doesn’t look positive for history to be a good predictor at the moment. Slaughter is still down considerably, with supply tight, so again, the fundamentals are there that support for prices should remain next week. 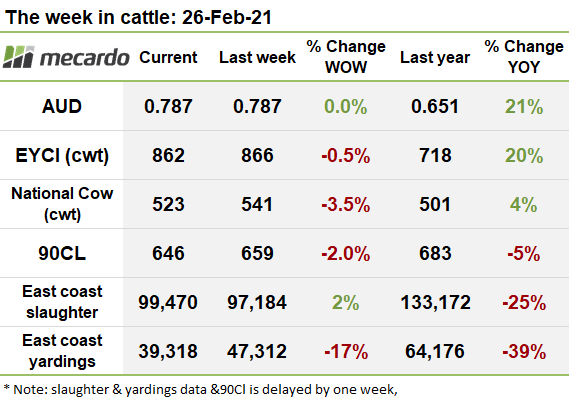 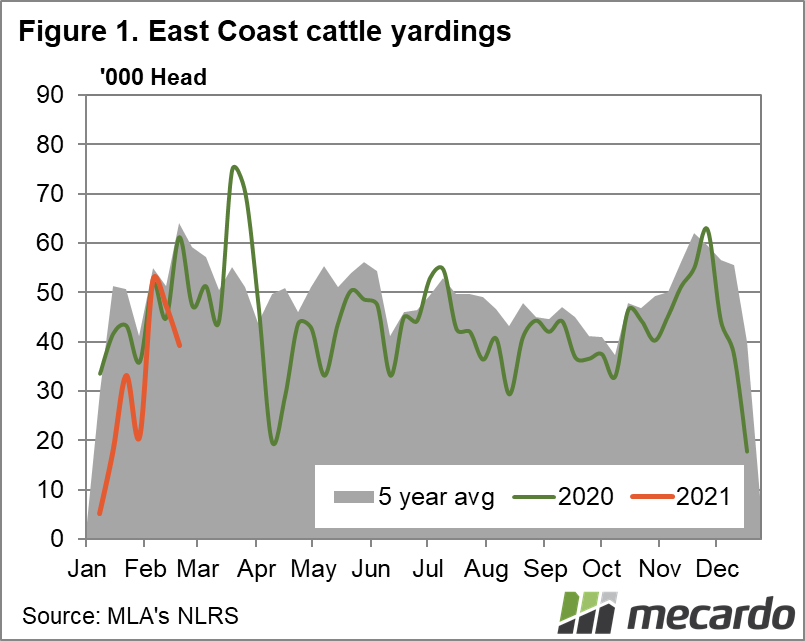