Yardings and slaughter are up, along with the EYCI, and restockers keep putting their brand on the market, but with a good flush of rainfall over the last week across most districts, plus JBS announcing the shut down of two major processing plants, we’re unlikely to see a repeat of higher volumes next week.

East coast yardings, week on week saw a healthy increase, despite Victoria continuing it’s headlong rush into the abyss, with NSW again taking up the slack. VIC yarding’s fell again, by 25%, to land at levels less than half of a month ago. In contrast, NSW almost doubled, up 85% from the prior week, while QLD and SA backtracked marginally. Overall an 11.7% increase in numbers saw 40,625 cattle yarded on the east coast for the week ending 7th August, which is 35% lower than the same time last year.

Slaughter numbers have stabilised, lifting 3% on the week prior.  When we look closer at what the states are doing, there is a bit of a mixed bag of movements. VIC slaughter was almost unchanged from last week, while QLD increased 10%, offset by 7% falls in NSW and a 20% drop in SA. A total of 117,095 cattle were processed, which is down 20% compared to the same time in 2019.

JBS has announced a 2-week minimum shutdown of its Dinmore plant, which, with a 3,400 head daily capacity, is one of the largest beef processing facilities in Australia. JBS has stated that the plant had been suffering losses for a long time this year, citing operations tracking at below 50% capacity since May due to low supply of suitable cattle, coupled with international pricing headwinds and a high Australian dollar, and distortions created by the federal government’s job keeper program. No commitment has been made to reopen, though the plant has been seen to return after a period of closure back in 2014.

Down south, in Victoria, JBS has closed its Brooklyn plant indefinitely as COVID-19 operating restrictions on meat processing are reportedly making continued operations untenable until the situation improves.

The Eastern Young Cattle Indicator (EYCI) again displayed stability, only inching up another 0.2% on the prior week, settling at 762¢/kg cwt. Most categories displayed minor weakness this week, apart from restockers continuing their rise, heavy steers leapt enthusiastically, defying the trend, while vealers returned to a downward slide, backtracking on some of the gains they made last week.

On the export front, the 90CL Frozen Cow price has been unfazed by our strong dollar, ambling upward by 6¢ to settle at 677¢/kg. It is, sadly, 4% below the level we saw this time last year.  The Aussie dollar displayed stability over the week, barely backtracking a whisker, to settle at 0.716 US.

The closure of JBS processing sites in both QLD and VIC is likely to suppress slaughter numbers, and yardings as producers lose confidence and hold off going to market. Good rainfall over the last week, across most farming districts right down the eastern half of the country, especially NSW have topped up soil moisture levels in paddocks, providing ample encouragement to hold onto cattle or continue restocking. 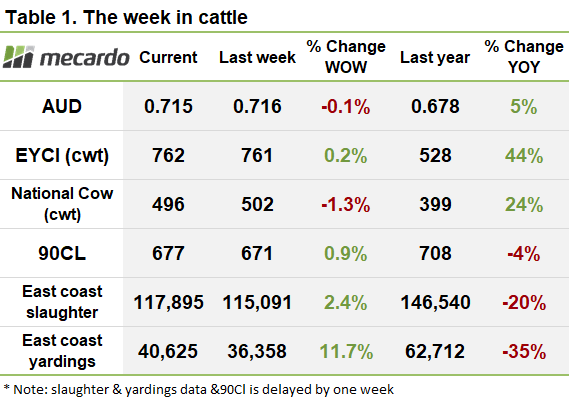 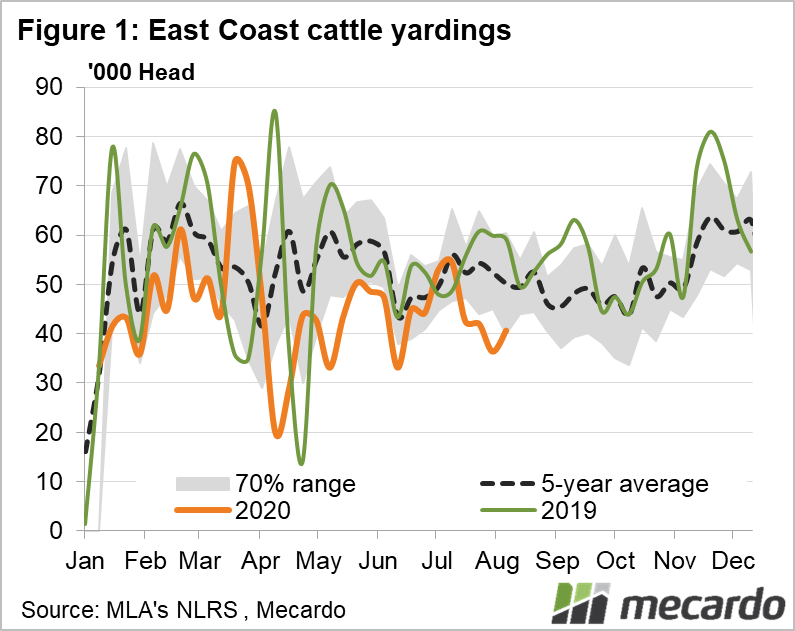