The young cattle market headed in one direction this week, up. The rain-driven rally saw the Eastern Young Cattle Indicator tack on another 32¢ to see it just under the recent record of 888¢/kg cwt. Supply has been disrupted, but the rain has extended the life of the high-priced market with green paddocks in the east here for a while yet.

Figure 1 highlights the rainfall pattern across the nation this week. While it brought hardship and stock losses to some, for many regions, particularly in Queensland where La Niña hadn’t delivered on its promises, this week has been as good as it gets. Rainfall further south was also present and helped to lift restocker spirits in the southern regions.

Restocker Yearling Steers gained 39¢ in Queensland and a whopping 75¢ in NSW to 609¢/kg lwt. The finished market didn’t catch the same fever but still the National Heavy Steer Indicator gained 11¢ on last week. Medium steers on the other hand lost 12¢ to settle at 376¢/kg lwt.

East coast yardings were down 14% last week, to just shy of 37,000 head. Queensland throughput was a major driver, dropping 40% week on week, and that was before the rain hit.  East coast slaughter continued to track along at recent levels with 98,769 head processed in the east.

The 90CL US frozen cow price slipped 1¢ in Australian dollar terms last week to 641¢/kg. In good news for export markets, the Australian dollar dropped 2.1% this week to 0.758¢, but with the rally in cattle prices, much of the benefit is likely lost for overseas buyers

Extremely wet weather is a recipe for disruption, and we’ve already seen the impact this week with Australia’s largest abattoir JBS Dinmore in southeast Queensland closing until after Easter. Other plants have announced closures, in addition to the public holiday shutdowns, and this might be enough to see the market ease off in the coming weeks. 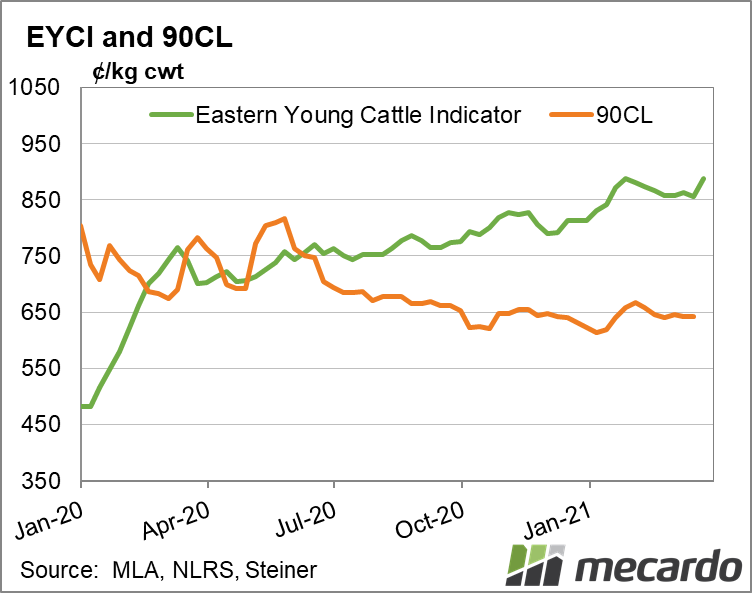